List of Cooling Systems for Off the Grid Living 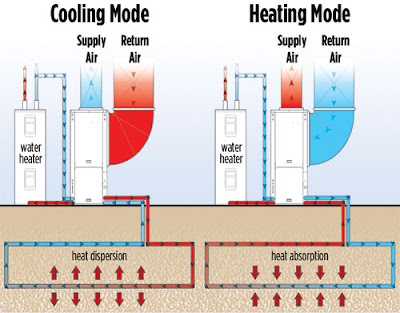 Air conditioners use a lot of electricity, but there are other ways to keep your home cool if you are living off the grid - although having the necessary cash is prohibitive for some of these ideas below.

#2. Cross Breeze - This is an old way of doing things, but still effective. You use drapes to keep out the heat from the sun, but open the windows on opposite sides of the house to let a cross breeze go through the entire house. #3. Water Cooled Air Conditioner - Honestly I only have a vague idea of how it works, here is the diagram below. From what I can tell it works similar to a geothermal unit, but using water as a cooling agent. 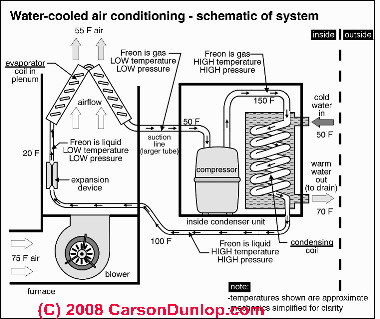 #4. Dehumidifier - Often it isn't so much the heat that is a nuisance. It is the humidity in the air that makes it feel even hotter. To solve this a Dehumidifier can be a very handy solution - and price wise they don't cost much. Energy use varies however so look for an energy efficient one. 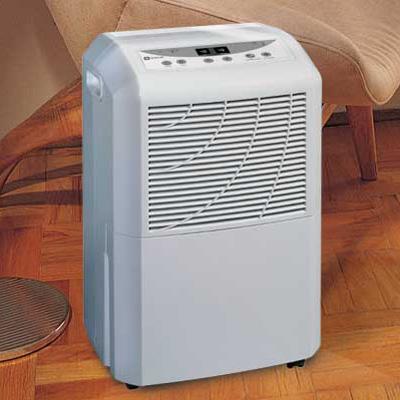 #6. Ivy - Grow ivy and similar vines (eg. grapes) on the south, west and east sides of your home. The ivy absorbs a lot of the heat from the sun and keeps the house cooler. However ivy can cause damage to the brickwork of your home over the long term. 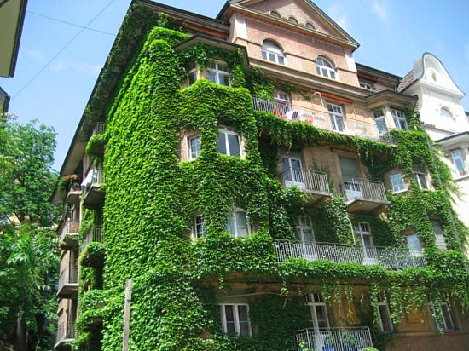 #7. Reflective Shutters - Shutters by themselves are handy things, but what if they were designed to be more like mirrors? Reflective shutters bounce light/heat away from your windows and keep the interior cooler.

Note: You can also get reflective blinds, but they're less effective because they're inside the window, whereas shutters are on the outside.

#8. Ceiling Vent - Similar to a cross breeze, but since hot air rises this is more effective. 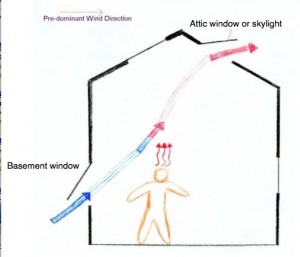 #9. Fans - Not the most effective route honestly. Fans work best in combination with a cross breeze or a ceiling vent. Otherwise you are just blowing hot air around. A dehumidifier is a more effective use of your electricity on a hot and humid day. If you simply must get a fan then get a ceiling fan.

#10. Start using your imagination. Everything from building an ice cellar to bringing blocks of ice out of the freezer. 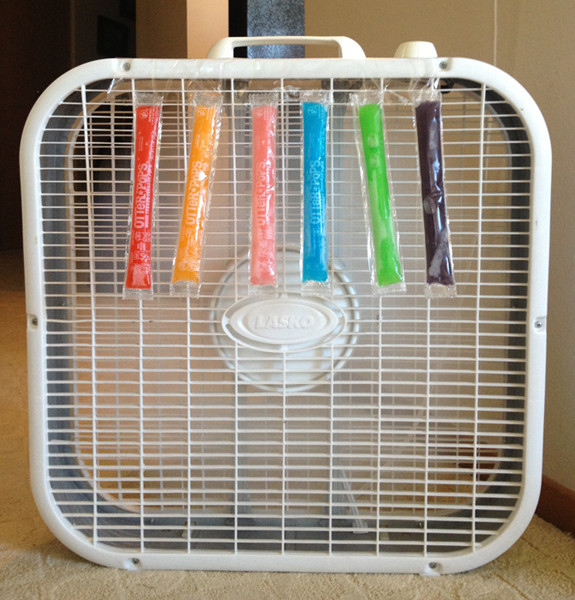 Email ThisBlogThis!Share to TwitterShare to FacebookShare to Pinterest
Labels: Electricity Off The Grid, Heating and Cooling

Off the Grid Technology

The following is a list of technological things useful for making a green home that is off the grid.

If your home is completely self sufficient you won't even need a connection to the electricity grid (and you pay less land taxes if you don't have the connection). However the cost of getting all of these fancy toys for your home can be daunting which is why many people prefer a DIY approach to Off the Grid living. 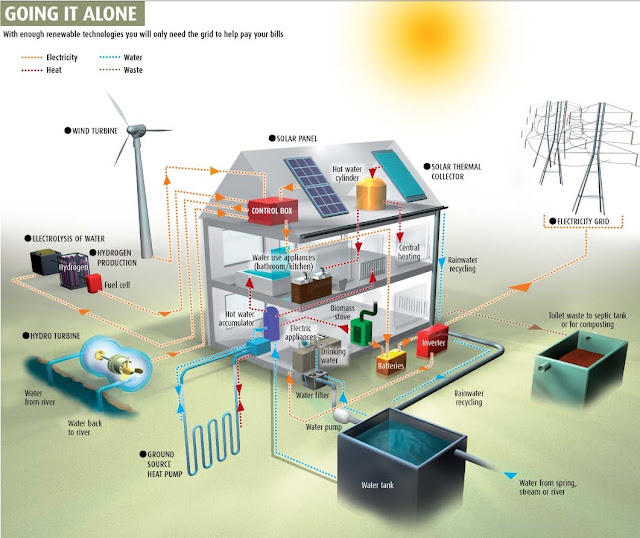 Email ThisBlogThis!Share to TwitterShare to FacebookShare to Pinterest
Labels: Electricity Off The Grid, Green Homes, Heating and Cooling, Water and Sewer Off The Grid

If you are looking to hunt using archery then one way to learn how to shoot is Instinctive. See the video below which explains how to shoot instinctively.

For archery lessons in Toronto visit CardioTrek.ca.
No comments:

Survivalism is a social movement wherein a variety of people (often from different backgrounds / modes of life) believe something bad is going to happen and believe in preparing for it so that they can survive.

Hollywood has a history of making fun of survivalists - and celebrating them at the same time.

Burt Gummer is a fascinating character in terms of the way that he has been stereotyped - the essential stereotype of survivalist with conspiracy theories about the government and the myriad ways "the feds" are trying to control people.

The character was so popular they made Tremors 2, 3, 4 and a tv show with Burt Gummer as the main character. (Although in Tremors 4 it is supposed to be his great-grandfather, but it is played by the same actor.)

And now back to the main topic...

Having determined the stereotype of the kind of people who become survivalists (they are not all like Burt Gummer after all) lets look at the reasons WHY they become Survivalists. Most of it is due to fear of one of the following things:

For fun every second one is a less believable reason. :)

#1. Nuclear War - Which is certainly a possibility. Especially with countries like North Korea who have nuclear warheads and missiles capable of reaching mainland USA. 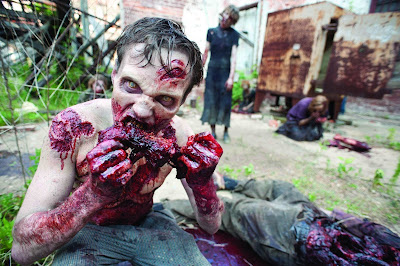 #2. Zombie Apocalypse - It will never happen, but it is a great topic for movies and TV shows like "The Walking Dead". And I wouldn't be surprised if there was a few people out there who believe it could happen.

#3. Economic Collapse - A real possibility. I would argue there is even a higher chance of this than nuclear war (although the two could coincide, one kickstarting the other). In a country like the USA for example all that needs to happen is for the American dollar to drop dramatically in value to the point that Americans are reduced to near slavery in order to make enough to survive - and when that happens people will become more militant, crime will be rampant, and society will slowly fall apart as the USA becomes one big ghetto. Although to be fair #10 will probably happen at the same time.

#4. Alien Invasion - Scientifically this is a possibility, but a remote one. More likely we would pick up alien transmissions from a distant star system long before actual first contact with an alien species. If our governments have made any communications with aliens in the past they certainly are not telling us about it. And why should they? It would cause a collapse when we would need to pull together and stay focused.

#5. Plague - Some kind of deadly super-virus could wipe out a huge chunk of the Earth's human population easily. Depending on how quickly the virus jumped from host to host the contagion could wipe out 90% of humans within a matter of a week. Depending on how deadly the virus is we can expect nation wide quarantines and the virus would likely be contained to specific regions. The real question then would be whether governments acted quickly enough to quarantine regions, or whether they would wait until it was too late and the virus was too widespread.

#6. The ATMs Rise Up - The robots are out to get us, oh no! Science fiction can come up with anything these days.

#7. Government Takeover - Government surrenders to a superior force (like in the 1984 movie Red Dawn and the 2012 remake), government turns into a dictatorship, corporate takeover of government (including privatization of police and military)... or even the government has slowly become too weak to do anything and there is really nobody in charge - and laws have become almost meaningless. Some of these are more likely than others. 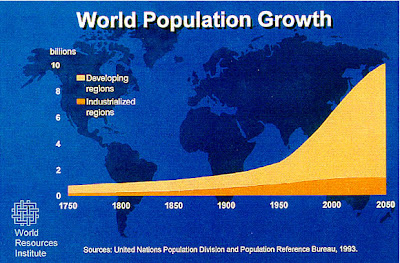 #8. Government Organized Cull - This idea is somewhat farfetched, but is indeed a possibility. Basically it harkens to the idea that the various governments would deliberately kill off large numbers of the human population because humans have become too plentiful and we are fighting over resources. At almost 7 billion people the argument could be made that we have too many people, not enough water and food to go around, so lets kill off about 86% of the population in each country and then start afresh from the population we had back in 1750 (1 billion for all of the Earth). However what is farfetched is the idea that our governments would willingly seek to kill off large parts of their family and friends - and willing risk that their plan will go perfectly without screwing up somehow. What is far more likely is we will just have wars over resources - and use chemical or biological weapons against enemies in order to more quickly secure those resources.

#10. Civil War - For Canada it would be our first civil war. For the USA it would be the 2nd Civil War. The exact cause doesn't really matter. The point is that some people believe it could happen. One such group, the Hutaree, back in 2010 was mere weeks from launching their own private civil war in an effort to separate part of the USA away from the other states and make their own separate country. They thought that if they got the ball rolling that other militia groups would join them and they would be able to control Michigan, Ohio and Indiana. Fortunately they got caught by an undercover FBI agent. I don't think militias could accomplish anything big however. The best they can hope for is things like the Waco siege or the Oklahoma City bombing - and while those did cause significant loss of life, they ultimately failed to convince anyone of their political motivations. Ignoring a militia led civil war, it is entirely possible a civil war in the USA could be fought if communism ever started to rise to power during a moment of economic instability of such a length that enough people would consider communism to be the better option - and this would lead to fighting against pro-communism and anti-communism states.

Honestly, there are many other reasons why people might become a survivalist who lives off the grid. Reasons as simple as being a germaphobe.
No comments:

Deer Crossing Lady on the Radio 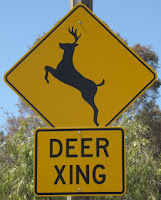 I normally don't post funny things on Project Gridless but I made an exception for this because I felt the video was both "that funny" and worth sharing on here.