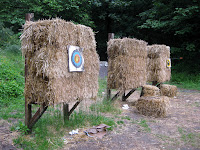 Now I should note that there was only 20 posts during 2016 - and one of those posts did so poorly I decided to deactivate it and just move it to 2017 so that there will be an even number of 20 posts for the whole year of 2016.

Note - I didn't even write the post you are currently reading until September 2017, I just backdated it to December 31st 2016. I waited at least 8 months to see which articles would be the most popular before writing this.

So here they are, in order of popularity.
The big themes this year clearly was archery, bow making, and hunting. While the #10 article was about Off Grid Living, articles about such were both in short supply in 2016 and less popular. Blame supply and demand? Or maybe it is because archery is simply a more popular topic - both for me and for readers.

2016 also saw a number of older posts go viral, with some months in December hitting record highs in terms of visitors to the website. December 2016 had a record 9,680 visitors. (This is a small number compared to some of my more popular websites, but it marked a turning point in terms of Project Gridless's popularity.)

I have spent almost no time on promoting Project Gridless - no advertising, no link building - every visitor gets here via Google or random links added by strangers (which in the advertising biz we refer to these people as "Mavens").

In the future I might decide to invest some time/money in promoting the website, but for now I am happy to just be writing quality content / taking photos / making bows / etc.