10 Recurve Bows every Collector should Want, and Why

Now because there are many types of bows I have decided to limit this particular list to ONE PIECE recurve bows. In the future I may do a 2nd list in which I list off 10 takedown recurve bows every collector should want. I may also end up doing separate lists for longbows and compound bows too.

For those archery aficionados / toxophilites out there who love collecting recurve bows, this list is for you.

There are particular bows that stand out from the rest, some for historical reasons and some because they are really great bows worth mentioning. They are classics and if you are into collecting recurve bows, these are ten classic recurve bows worth adding to your collection. For each bow I will be listing reasons WHY this particular recurve is worthy of your attention and why it is worth collecting.

Any recurve bow that is older than 1932. 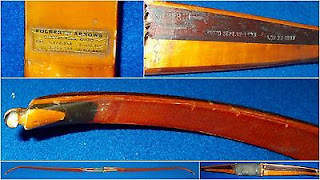 Any recurve bow made by William Folberth during the 1930s.
The Bear Grizzly Static from 1949.

The Bear Grizzly (any year, but older is definitely more interesting).


Final Note - At present there are no recurve bows from the 1990s or 2000s that I feel have any sort of historical value. There are certainly lots of pretty bows in good condition that you can buy just for the sake of collecting them, but none of them from 1990 to present really stand out in my opinion. Perhaps I will amend this in the future if I see a model of bow worth mentioning, but at present there aren't any I would be attempting to collect.