In the past myself and a friend experimented with making our own wooden stabilizers for archery and testing out how well they worked.

Below is a vintage wooden stabilizer made of rosewood and steel from Damon Howatt (circa 1970). It comes with an internal steel spring mechanism to further reduce vibrations. I came across this rare find on eBay, but I chose not to bid on it because I felt the price was too steep. Plus I felt I could probably make one myself, so I have added this to my Woodworking To Do List for Winter 2016. 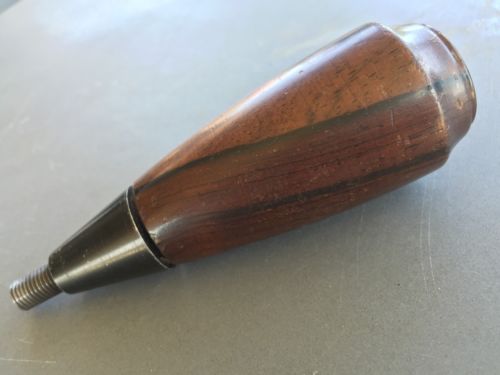 Lately I have been purchasing vintage bows on eBay. So far I have purchased:

The Ben Pearson Cougar could be used for hunting small game (eg. rabbits) or for bowfishing.

When buying vintage bows I feel it is important to stress that you probably don't want to putting these bows under a lot of stress (especially the older longbows from the 1940s or 1950s) because they are technically antiques.

The Roy Rogers Longbow - which I feel is the most fragile of the bunch - I will probably only shoot in my garage and will keep it hanging on the wall the rest of the time. It is more of a collectors item.

The Cougar, Avenger and Wasp however will get to see a lot more action since they are reinforced with fibreglass. As will the Ben Pearson Lemonwood, which is surprisingly fun to shoot. Being made of lemonwood it can take a lot more pressure and stress than various other bow woods.

Shooting vintage bows is really no different from shooting modern bows with similar designs. The technology hasn't really changed that much despite the decades, and depending on the brand name of the manufacturer it was made to last the test of time. The biggest trick is that you should never overdraw a vintage bow. Stick to 28 inch draw or less, as that was what it was designed for.

Earlier this year a friend of mine broke his old Ben Pearson recurve bow from the 1980s - it was comparatively new, but he was drawing it back near his ear to a distance of 32 inches or more each time he pulled it. That bow was only designed to be pulled 28 inches, at most 30 inches. Pulling it to 32+ all the time meant that its days was numbered and when I heard that it broke it was a sad day, but it was a little expected to happen eventually because of the distance he was pulling it so often.

If you have an old bow but never learned how to shoot it and are looking for archery lessons in Toronto contact CardioTrek.ca. Have a great day!

I also later purchased the following:

I have signed up for bowyer lessons from Mike Meusel in Toronto.

I have been making bows using my amateur bow-making skills for 26 years now, so this will be the first time I am getting proper training by someone who is really good at making bows.

What do I get? Any bow(s) that I make during the approx. 20 to 30 hours of bow-making experience.

Mike also sells longbows, flatbows and pyramid bows. For a custom made bow contact him using the info below. 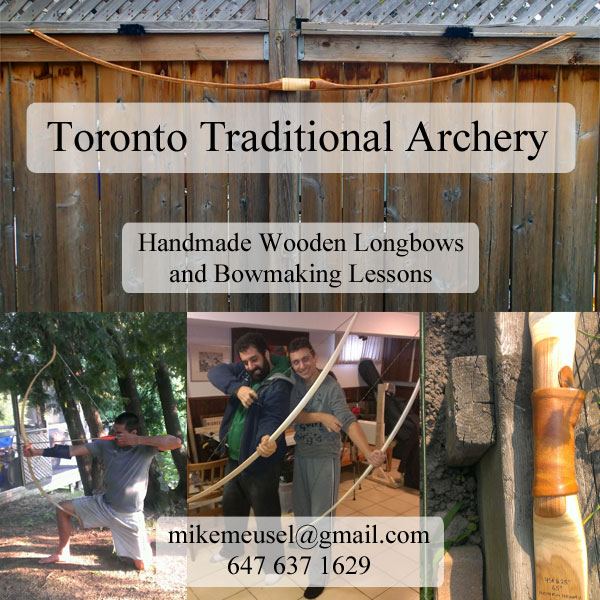