I found this article in "Bowhunter" magazine. I thought it was awesome that their true joy of bowhunting wasn't actually the hunting part, but the camping and relaxing parts. I have included the source citation at the bottom. 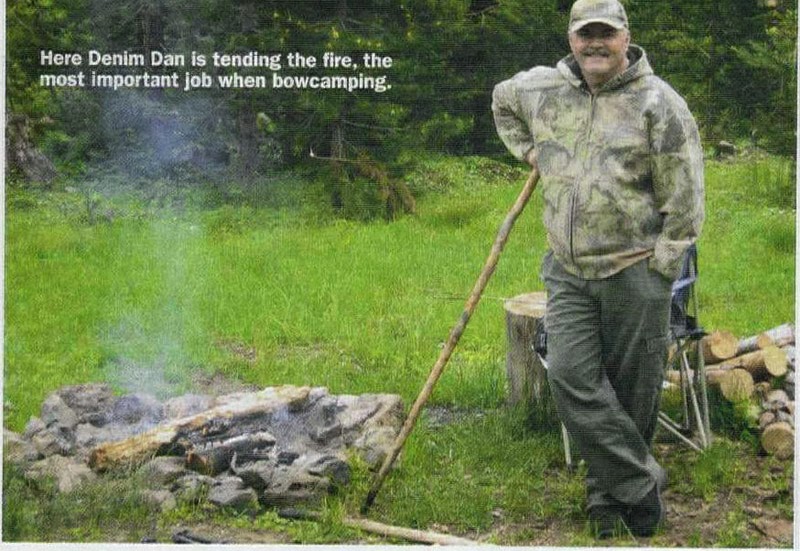 YOU won't find "bowcamping" in the dictionary. The word was actually invented by my buddy and fellow bowcamper Denim Dan. If it were in the dictionary, the description might read something like this: "The act of enjoying oneself during archery hunting season in which the actual harvesting of the game animal pales in significance and in order of importance to the enjoyment of the experience as a whole while spending weeks on end with good friends in a wilderness environment."

That pretty much sums it up. I feel that a vital ingredient required for one to be satisfied and successful at bowcamping is that of age, namely old age. You know, the "golden years." That season of life when you have the time to do all those things you no longer have the energy to do. Yes, my friend, growing old ain't for sissies! But listen up, and you too may discover the "joy of bowcamping."

Back in the early days, when we thought we'd never grow old, our numbers were double what they are now. We hunted with the fierce intensity of a bunch of Army Rangers on a forced march behind enemy lines, intent only on successfully filling our elk tags! As the years took their toll and we gradually slowed down, several of our group fell away and now only show up sporadically. There are but three of us remaining who faithfully spend every day of the season in camp. We may have set aside some of that intensity, but not the thrill. The job of keeping the tradition alive has fallen to us. We are the diehards. As for the cast of characters, let me introduce to you the participants in our annual trek to the place we lovingly call "Elk Camp."

I've mentioned Denim Dan previously. Dan is the elder of our "tribe" by a couple of years. My kids gave Dan this nickname because of the mellow, laid-back attitude he has always shown toward life in general. Dan was actually practicing bowcamping long before we saw the value of it. I might also add that he took a fair amount of ribbing because of it. (Not to mention that he has filled more elk tags than any of us. Go figure!) Then there is a buddy whose name is actually Dave, but we've always called him Fred. Fred has been a friend for many years but has only recently joined us in camp the last four years or so. Fred has yet to fill an elk tag with archery gear. It doesn't seem to diminish his enjoyment one bit, while at the same time it gives us the opportunity to rub it in, good na-turedly of course. That leaves me. I don't seem to have acquired a nickname. Dale, Jack, and Chuck show up once in a while and maybe hunt a day or two. We'd love to have them back in the "fold." Then there's Brian, but more on him later.

As for a typical bowcamping day, the first thing that you'll need is an alarm clock with a snooze button. This is mandatory. Usually the alarm goes off around 4 a.m., when it's still very dark and cold outside the old trailers. At this time of morning, the sleeping bag has a special charm that invites you to stay put. Hit the snooze (after lighting the burner under the coffee pot Of course), and smile as you drift back off to dream land awaiting the next reminder to rise and shine, and with it, another opportunity to hit the snooze yet again. Usually we do all tend to rise early enough to be hunting at first light, but if one chooses to, sleeping in is perfectly acceptable behavior and carries with it no guilt. In addition, an unwritten rule we bowcampers have come to embrace is that the sound of rain hitting the trailer roof when the alarm starts its irksome clamor is the cue to snuggle deeply in your bag and sleep until the rain ceases. Yes, I guess we have become fair-weather bowhunters.

In determining where to hunt in the morning, a set of objectives is analyzed. First on the list is fairly level ground as arthritis, rheumatism, and worn-out joints dictate. Secondly, in the unlikely event that one of us actually puts an elk down, the job of packing the meat out precludes hunting too far from where your vehicle is parked. This is also helpful in making sure that one is back in his favorite camp chair drinking coffee by around 10 a.m.

Upon arrival in camp, the first order of business is comparing notes with the others. When it has been discovered after those very tense first moments that no one has filled a tag, a sigh of relief is breathed and the coffee drinking and story telling can commence. It is helpful at this time if one or more of us has been "into" elk, and even better if perhaps someone has almost gotten a shot. Stories of the "one that got away" make for new material. If not, we always have the tales we've all told a dozen times or more. These stories never lose their luster, and after as many hunting seasons as we've racked up, are in never-ending supply. Then comes snack time and perhaps a midday shower, always followed by a nap. As I've inferred previously, having to pack out an elk would severely interfere with this schedule.

Upon waking from naptime, preparations ensue for the main meal of the day. After this feast, we all retire to those comfy camp chairs and still more stories and jokes fill the afternoon hours. Eventually the time to prepare for the evening hunt draws near. Each bowcamper will determine where he will hunt for the evening, bearing in mind the same requirements as for the morning hunt--namely level ground in close proximity to one's vehicle. These elements become especially important now as one will be returning in the dark, and the biggest fear that a bowcamper has is to get lost and spend a cold and lonely night in the woods, away from what is the very best part of each day, campfire time. 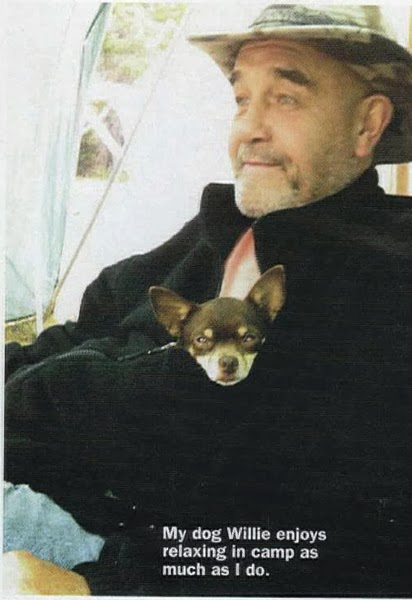 Straggling back into camp, our eyes are drawn to the glow of the fire, which is usually going nicely due to the fact that Denim Dan rarely stays out till dark, ordinarily arriving before Fred and me Gotta love that guy! Now the fun begins in earnest--more camp chair time!

Customarily, peanuts, jerky, and beer (did I mention Jameson Irish whiskey?) accompany this most revered of all the segments of the standard bowcamping day. Once again stories are told, jokes abound, and laughter is heard. If someone tells a tale or a joke that has been told before (a common occurrence), bowcamping etiquette dictates listening as though this is the first time you've ever heard it. Heck, at our age it's hard to tell.

Frequently we will entertain visitors during this time of revelry. One of those is the aforementioned Brian. Brian is quite a bit younger than us, and as such, doesn't qualify for full status as a bowcamper even though we regard him as family and thoroughly look forward to his visits. Brian still has full use of his legs hunts with a passion, covers a huge amount of ground. and has consistently filled his tags going on 14 years now, some years in multiple states! He typically passes up shots on all but big bulls, and has won elk-calling contests while being the consummate bowhunter. You can begin to see why he doesn't qualify for full membership. When Brian is hunting near us, we can't fully relax into our routines until we are sure tie hasn't downed a huge bull in some remote canyon or on some formidable mountaintops requiring our assistance in the pack job. Please pass the Excedrin!

Eventually, the time arrives when the eyelids begin to droop and the sleeping bags commence to sing their siren songs. A good night is wished to all as we disperse toward our respective trailers, signifying the end of another satisfying day in the wonderful life of a bowcamper. Snuggled warm and secure in the comfy Coleman, the good Lord may hear the words of the bowcampers prayer: "Now I lay me down to sleep, I pray the Lord my soul to keep. ibuprofen dulls the pain, set the alarm and let 'er rain."

Email ThisBlogThis!Share to TwitterShare to FacebookShare to Pinterest
Labels: Archery, Camping, Hunting Food Off The Grid