My woodworking project this winter has been an experiment in how to make a homemade crossbow. Below are some photos of the project as it is progressing.

Stage 1 was to make the basic crossbow shape, including the handle / stock, the bow limbs, and the bowstring which I made out of braided sisal. (Sisal is stronger than cotton or jute, but not as strong as silk or dacron. Sisal is more readily available which is why I chose it. It also doesn't stretch and if it does snap, it is cheap to replace.)

The wood used is oak. 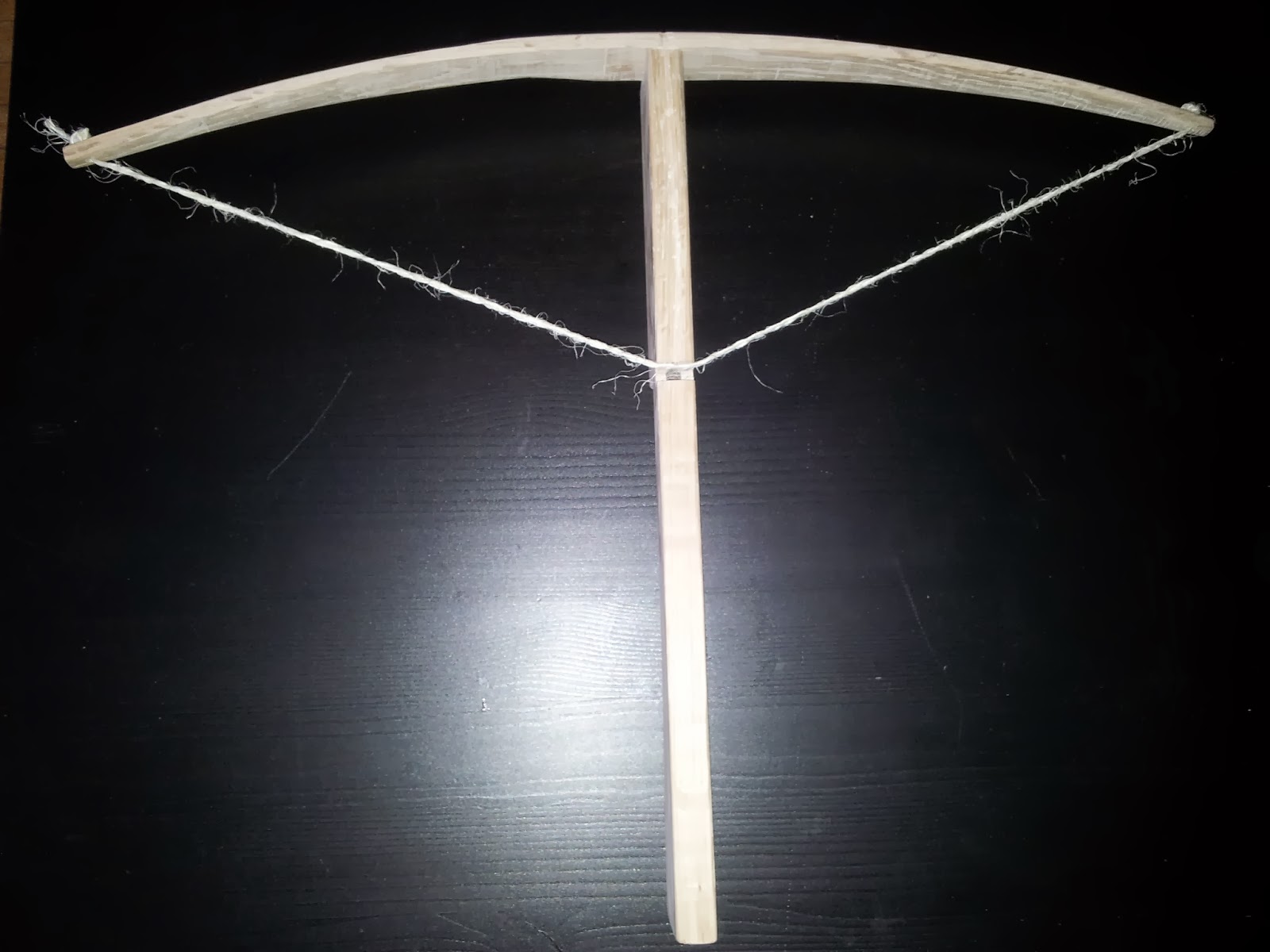 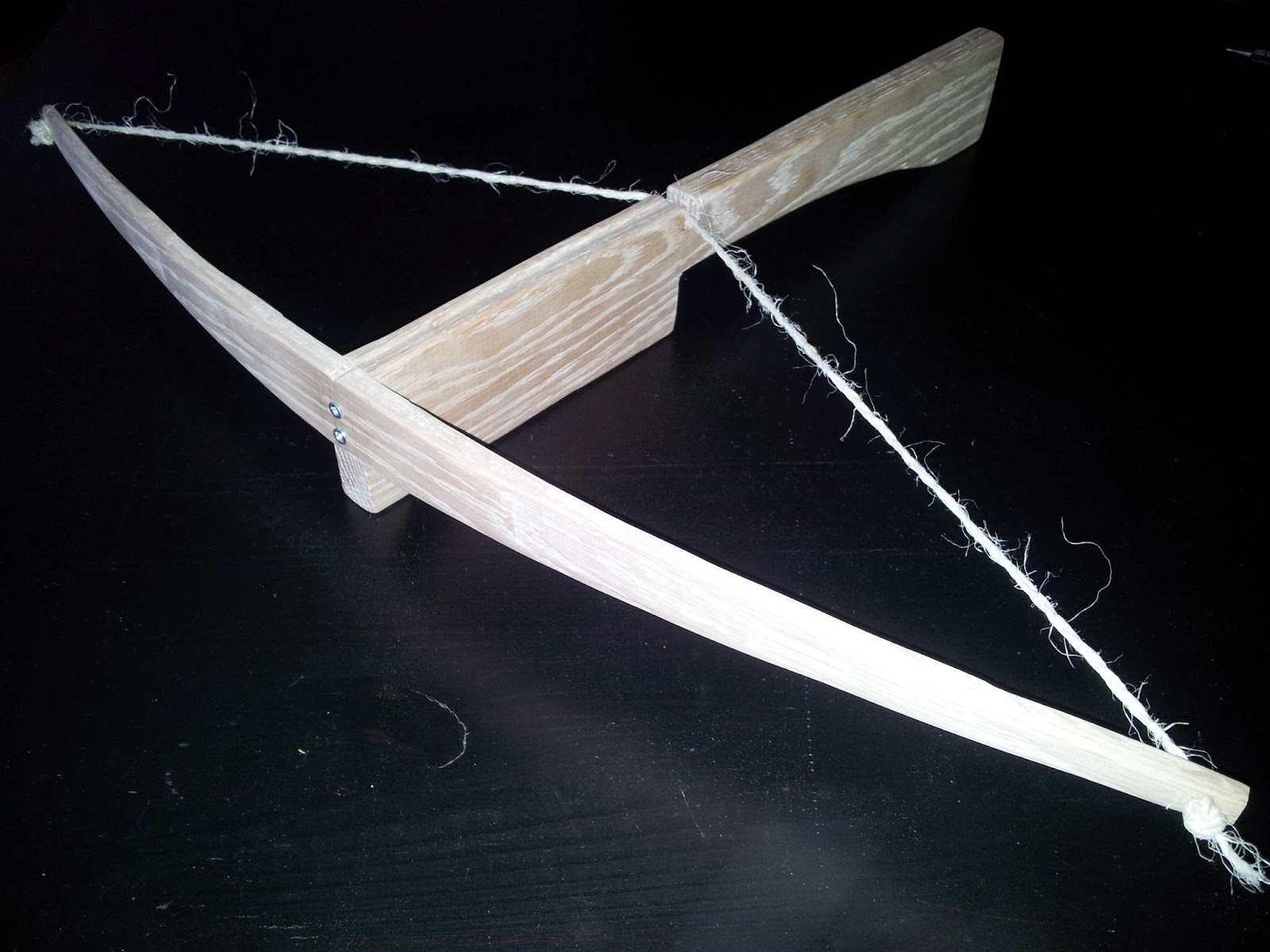 Stage 2 was to make a working trigger and stirrup (to pull and cock it faster). As you can see below I have completed part 2A of Stage 2, but have yet to make the stirrup (part 2B). The trigger mechanism is pretty simple and follows a centuries old crossbow design.

The wooden dowels used for making the trigger is poplar.

While testing the trigger I shot a pencil (for lack of a crossbow bolt being handy) several times at a cardboard box. It was surprisingly accurate and powerful. (It takes two hands to draw the bowstring back to the trigger position so I guess I should not be so surprised it is so powerful.)

Safety Note - Due to the trigger design you cannot set it on a table while cocked, the trigger will be pushed upwards and set off the string. I did not discover this the hard way, I was smart enough to realize it before setting it down. 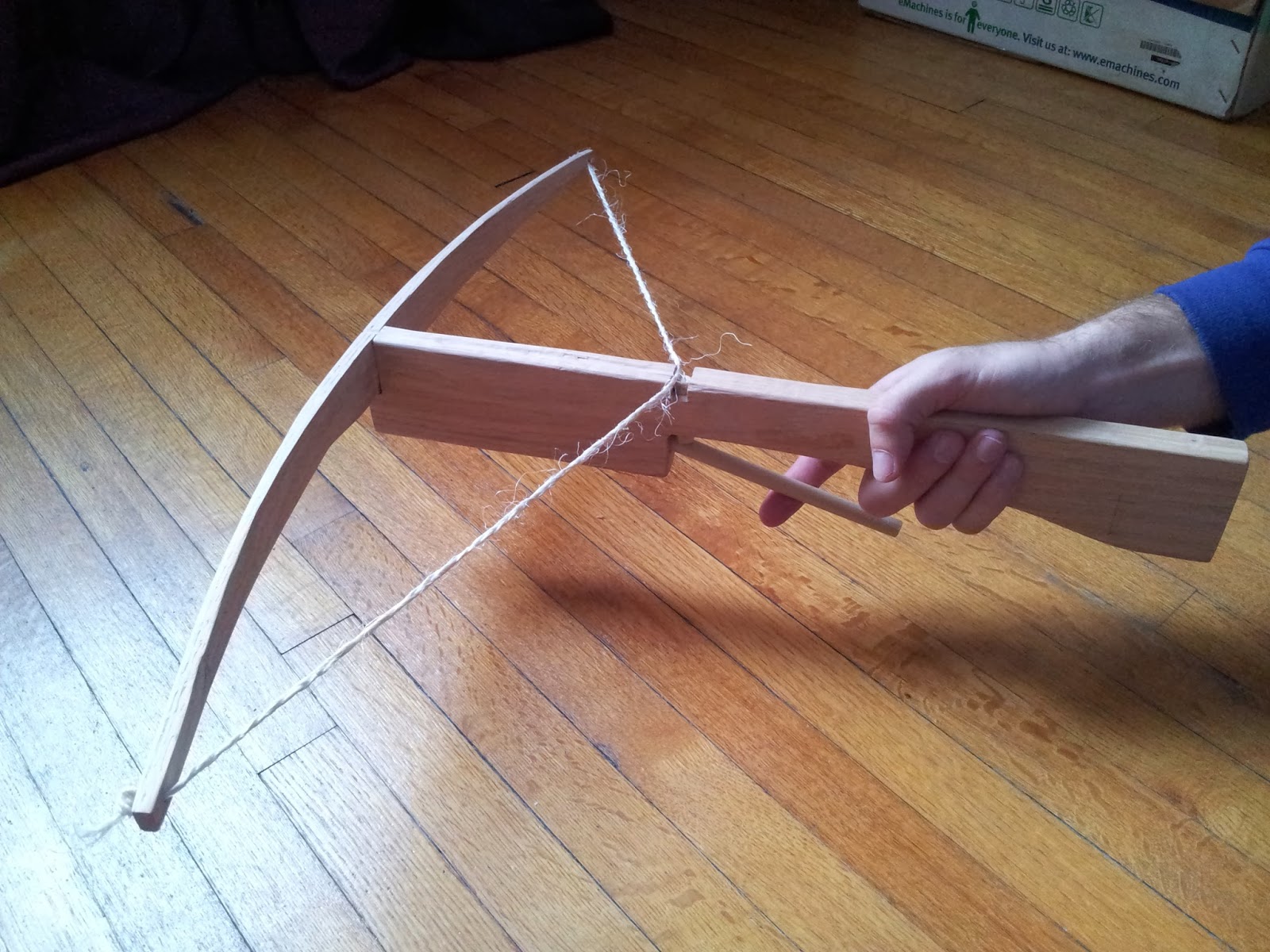 Stage 3 will be to "beautify the crossbow" - namely sandpaper, fine sandpaper and eventually shellac.

Stage 4 will be to create several small wooden crossbow bolts, complete with feather fletching and steel arrowheads. I may decide to shellac and beautify the crossbow bolts too.

Stage 5 will be to make a wall rack so it can sit on the wall as an objet d'art. Because frankly I am not planning to do anything with this beyond testing it out and maybe shooting at cardboard boxes. (See my notes below about making a larger version.)

I have not used any formal designs made by someone else. I have relied entirely on photographs of older style crossbows and then designed it as I saw fit.

Seeing how well it is working I am already planning to make a larger / more powerful version. In which case my biggest question will be "how big" because obviously I still need to be able to draw it back and cock it. Building one with a crank or lever would require significantly more research on my part in order to make a working prototype.

Thus I consider the above crossbow to be a smaller scale prototype of my future crossbow, one that will still be hand drawn and cocked, but more powerful. I am not sure if I will use oak for the bow next time. I might use maple or something more flexible instead.

Build it, practice with it so you become really good with it, get your hunting license, and you can legally hunt with a homemade crossbow as long as it fulfills all the requirements.