This list is mostly for my personal reference, with respect to dating old Bear bows. They are sorted by the years released. If you know of additional old models, and know what years they were released, please post a comment about the model type and what years they were available and I shall update the list. Also if you spot any errors, please feel free to comment and help keep the list accurate.

From 1964 and earlier the serial numbers were reset every month, making them very tricky to date.

Bear bows from 1965-1969 are dated with with last digit of the year being the first number of the serial number.

Starting in 1959 all Bear bows came with a coin medallion inset in the bow.
Until 1972 all coins were flush with the wood. In Autumn 1972 the coin was raised above the surface of the bow.

Many of the early Bear bows had a patent mark on it. eg. CANADA 1953. It doesn't mean the bow was made that year however, merely that it was patented in that year. It does help to narrow down the age however.

Prior to 1959 many Bear bows had a decal stamped on the bow. 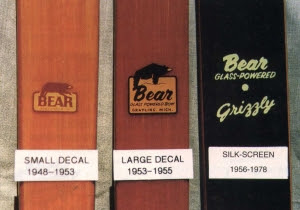 If the wood is all one piece, then it is older than 1949, which is the year Bear started mass production. After 1949 all wooden bows were laminated.

If is all wood and has the Running Bear decal, then it is definitely from 1948.

All Bear bows made prior to 1959 came with a leather grip.

In 1978 Bear moved all manufacturing and offices to Gainesville, Florida. If it has that location stamped on the bow, it was made after 1978.

If it says Grayling, Michigan then it was made prior to 1978. 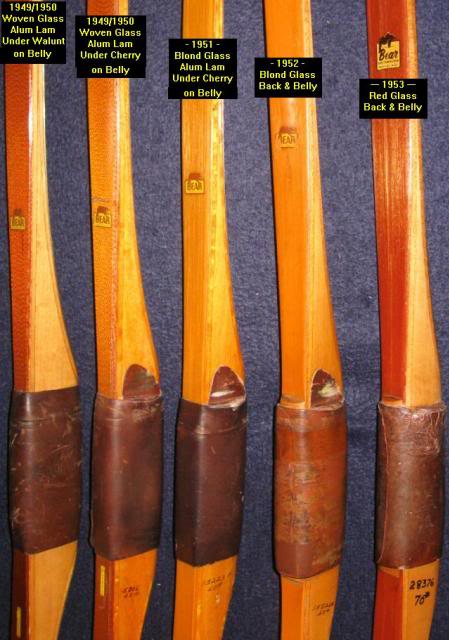