Off The Grid Internet

Living off the grid isn't just for people who have a serious animosity for modern civilization and its faults.

The truth is many people who seek to live off the grid are just tired of paying for electricity and have realized there is a way to have their cake and eat it too.

Thus you don't need a jaded perception of the Grid – the power grid that brings electricity across all of North America – and whatever it represents to you. You just need a desire to stop paying for electricity.

But what about your internet?

If you are like me you probably have difficulty living without it. Computer, tablet, smartphone. It is always there. Unplugging those devices from cable internet, DSL or the phone line (whatever it is you use) is nigh unthinkable.

Enter satellite internet - the most portable way to stay connected anywhere in the world.

The truth is we've had satellite internet for decades now (since the late 80s), but it was very expensive in the beginning. Now it is becoming really cheap and affordable for the average person.

You won't get huge download speeds - we haven't reached that point yet - so don't expect to be downloading movies over the internet via Netflix, etc.

Why satellite internet works off the grid

Satellite internet (also known as Internet over Satellite or IoS) refers to an internet connection service that relies upon a satellite to transmit data back and forth. It's a type of connection that is naturally suited for living off-grid for several reasons.

First, satellite internet allows for relatively fast and efficient connectivity. It is quite capable of handling common uses such as sending and receiving e-mails and attached files, downloading and uploading data, quick viewing of websites, chatting, online gaming – basically every good thing that a high speed broadband internet connection has to offer - but you won't get huge speeds like you would on cable or DSL.

Second, satellite internet allows for uninterrupted speeds. Other types of connectivity such as DSL and cable can be slowed down by faulty cabling or bogged down by the number of neighbours on the same system.

Third, off-the-grid locations are generally off-limits in terms of connectivity. The lack of facilities in remote locations can also present a problem. With satellite internet, anyone choosing an off the grid lifestyle can still enjoy efficient communications via the Internet and even VOIP.

Currently, satellite internet is the only type of internet connection that can be used efficiently in remote areas, generally where off-the-grid living happens. Since access to the internet is obtained via satellite, anywhere a satellite dish may be placed with an unobstructed line of the sky can initiate the use of the service. For the majority of people living off-the-grid, that's virtually anywhere.

Except in caves or underground.

In which case you will need to run a cable up to the satellite from your underground bunker / whathaveyou, just so you can enjoy wasting time on Facebook from the comfort of your wee home in the ground.

What is more you can even get handheld satellite transmitters now too. The device below costs $250 + $10 per month for internet service. 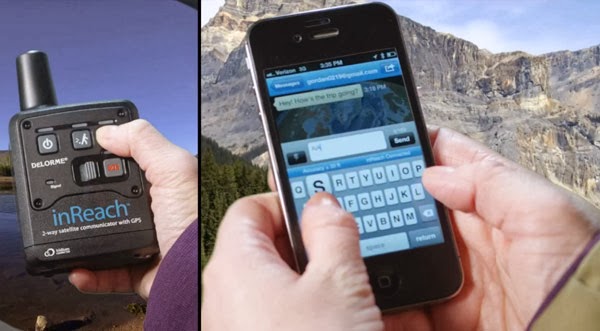 Email ThisBlogThis!Share to TwitterShare to FacebookShare to Pinterest
Labels: Off The Grid Internet