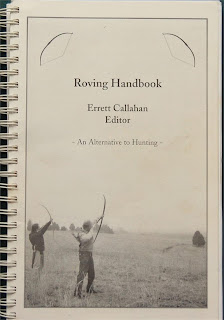 Roving is a traditional practice of archery dating back centuries whereby you go for a nature walk and shoot targets along the way. There is even songs about it...

A Roving We Will Go, We Will Go No More A Roving, etc. There is a lot of old songs about roving.

In the olden days groups of men (usually young unmarried men) would grab their archery equipment and go for nature walks, roving as they went along - sometimes with alcohol - and have a really fun time walking along and shooting things in the distance.

Back then and even now roving was a good way to practice your hunting skills without actually injuring anything.

In the video below is a Norwegian couple who demonstrate roving in the woods.


Not to be confused with another archery sport, which is Clout Shooting. Clout shooting your goal is to shoot for distance, but still manage to hit within a radius of a flagpole. It is a bit like lawn darts for distance shooters. For men the clout distance is 180 yards, for women 140 yards. (These rules sometimes vary by country. The distances mentioned here are British GNAS.)

Scoring for clout shooting is as follows:


Clout Archery traditionally used rope to mark the boundaries of each radius.

As archery sports go there is also Popinjay - which involves shooting at a fake bird on top of a pole.

Email ThisBlogThis!Share to TwitterShare to FacebookShare to Pinterest
Labels: Archery, Hunting Food Off The Grid, Sports