During yesterday's bow making session we finished the tips and began working on tillering the bow. We had to do the tips first so the bow could be fitted with a tillering string, which in this case is made from fast flight bowstring and knotted with a flemish twist on one end and a bowyer's knot (aka timber hitch) on the other end.


Unfortunately the photos below also have the back of my head in the way. Oh well. You can see glimpses of my rather robust winter beard. 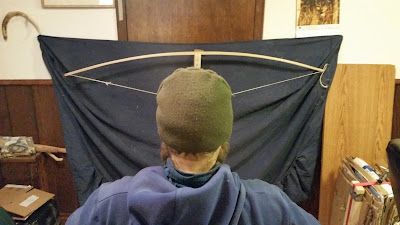 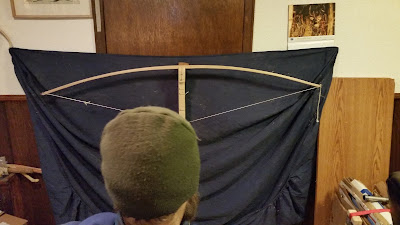 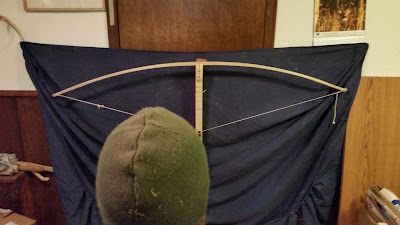 The trick to tillering is to get both top and bottom ends of the bow to be bending evenly - both near the handle, near the middle of the limbs and at the midpoint near the tips - but with zero bend in the tips. (A "whippy tip" reduces the speed of the arrow, whereas a stiff tip makes arrows travel faster.)

Thus tillering is a slow gradual process. We start by tillering to 3 lbs over our desired draw weight at 10 inches, and work gradually on each stage on keeping the bow bending evenly on both sides and in all the locations where it should be bending (and bending the proper amount). Once this is done it is a matter of slowly removing layers of the belly wood (ignoring the tips) so that the length of the bow bends evenly, checking regularly to make sure there is no spots which are not bending evenly and fixing those spots.

In the above example the flatbow-longbow I am making will have a bendy handle - which means when drawn back the handle also bends a tiny bit. When shot a bendy handle will have more "hand shock", but the bow also save on size and weight - which makes it faster. So there is a trade-off for speed in exchange for reduced hand comfort. Depending on how much bend there is the handle there will be more/less hand shock for the user. 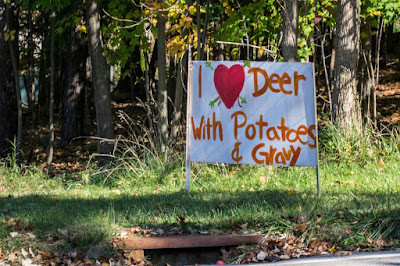 I would argue YES and NO.

But let me explain.

I have many vegan and vegetarian friends. Friends who are aghast that I am pro-hunting. For them they have chosen a vegan lifestyle due to often religious reasons and/or health reasons. So to that group of friends, the concept of hunting is basically a sin. They cannot comprehend it and see it as murdering animals.

However I am an omnivore. I like eating meat. I also don't have any emotional hangups about it either. I am pro-hunter and pro-farmer. I grew up on a farm in a community that frequently saw the comings and goings of various hunting seasons. As such I am quite accustomed to such things. To me, hunting, fishing and farming are natural ways to get food. And anything that is natural cannot be wrong.

I also don't believe in any higher powers. We die and it is just oblivion. I am not going to be reincarnated and punished for my actions. Karma is nonsense and superstition. No god either. Just oblivion.

If someone were to give me a lamb, a cute little cuddly lamb, I would be faced with two choices:

#1. Eat it now (or soon), because I have zero interest in keeping a lamb as a pet.

#2. Raise it to adulthood and then eat it. Option 2 requires more work to raise it, but I get more meat as a result.

Honestly, I am leaning towards option 1. Lamb is very tasty. True, mutton tastes good too - and you get more of it, but it is a bit of a coin toss. It would be like asking me to choose between 1 lb of bacon and 2 lbs of pork chops, but I have to feed the darn pig to get the pork chops. I think I would choose the bacon in that scenario because it A. Tastes better and B. Requires less work.

So that lamb is probably going to be slaughtered and eaten. Poor little lamb. Why did you have to be so tasty and convenient?

Option #3. Raising it to adulthood and breeding more lambs is always an option I suppose, and then eating the older sheep / new lambs... well that would certainly be lots more meat, but also way more work. Not my priority unless I decide to deliberately become a shepherd.

Which brings me to the topic of livestock farming for feeding yourself (as opposed to selling the meat for money). I don't see anything wrong or unethical with farmers raising their own livestock, slaughtering / butchering them and then eating them. Makes total sense. They are intimately involved with the whole process and are taking personal responsibility for their own food.

Lets say I was a deer hunter and one day decided I wanted to become a deer farmer. My goal therefore would be hunt for and tranquilize deer, transport the sleeping deer to a fenced in farm built just for deer, feed the deer, give the deer a barn to sleep in during the winter, pamper the deer so they get nice and big... and eventually slaughter / butcher / eat them for my personal consumption (or my family's consumption).

True it is much more work that hunting the deer, but I would get way more reward for my efforts. And I have zero problems with ethics of deer farming.

Livestock farming is not unethical.

Hunting is not unethical.

Because both of them take personal responsibility into where they are getting their food. However people who are lazy, get their food from a grocery store all of the time and never learn where their food really comes from and the process it takes to get there, then they have ignored that responsibility.

So why then do PETA / animal rights activists / vegans / etc always claim that livestock farmers and hunters are unethical?

Well to them they see animals as pets / companions / friends as opposed to a possible source of food. In truth they are both. A horse is both a companion and a possible food source. It is a duality.

Most animals however are not particularly friendly to humans. For the most part humans avoid eating animals we consider to be friendly: Dogs, cats, horses for example are often kept as pets and humans rarely eat them (although this varies by culture).

Animal rights activists also make a big deal about the whole "cruelty to animals" issue, claiming that farmers torture their livestock and are deliberately mean to them... And the analogy I am going to use here is the concept that "egg farmers are satan worshippers who torture their chickens in satanic rituals to get them to lay more eggs"... which is of course utterly false.

And why is that? Because there is nothing to be gained from torturing chickens. Happy chickens (hens) lay eggs. Unhappy hens don't lay eggs. So egg farmers have a primary goal of keeping their chickens warm, well fed and happy, which means they lay more eggs. Those eggs are then collected, sold and eaten. A few of them are sent to a chicken hatchery to be incubated and made into more chickens, perpetuating the cycle.

Now ask yourself, where is the torture or animal cruelty in that cycle? There isn't any. The eggs are unfertilized and will never become chickens. The chickens are warm, well fed and happy, which means they are laying lots of eggs.

Some chickens are eventually so old they stop producing eggs, so they are butchered for their meat.

The same goes with hunting. A good hunter never lets their prey experience fear. The bullet or arrow kills them so fast that the animal is dead before it hits the ground. That way the meat tastes better. It also means the hunter doesn't have to track the animal over (possibly) long distances to try and get a second shot at it.

So again I don't see a problem here with the ethics of either livestock farming or hunting.

Vegans are taking personal responsibility for their food, some even insisting on having organic produce which has not been exposed (directly) to pesticides. The problem is that organic food is often indirectly exposed to pesticides anyway, from neighbouring farms. But regardless, that is up to them to take personal responsibility for their actions with respect to food.

Farmers and hunters are doing the same thing. Taking personal responsibility for their actions with respect to food.

So what about the lazy people who buy their food at grocery stores, thus providing a living for farmers? Are they completely irresponsible? No. Because most of them have probably either visited a farm or seen a video of what it is like inside a slaughterhouse. So they at least have an idea of what is going on in there and yet still choose to eat meat.

Could it be because it tastes good and that weighing the options of either:

A. Eating meat and being happy about it.

B. Not eating meat and being unhappy about it.

They somehow decided to choose A, because happiness was considered to be more valuable to their own personal ethics, which means it comes down to the issue of freedom of choice.

Vegans obviously are unhappy with the slaughtering of livestock / hunting of animals, and they have chosen to exercise their freedom of choice by not eating meat. Not eating meat makes them happy.

However for us omnivores, the vast majority of humanity, eating meat does make us happy, and we have a freedom of choice to do so.

On the contrary however someone who comes along and says "No, you're not allowed to eat meat." or "You have to eat meat." that person is now behaving in an unethical manner because they are trying to rob people of their freedom of choice.

People have freedom of religion, freedom of thought, freedom of choice - and those freedoms apply to their food choices and their thoughts / beliefs about what foods they should eat.

For example I choose to eat bacon and lamb. They both taste great and I have zero ethical issues with where the meat is coming from. Pigs and baby sheep, huzzah, give me more of that.

But what I do have a problem with is people asking me to watch a slaughterhouse video because they are vegan and trying to convince me to become a vegan too. To which I respond:

Why are you trying to rob me of my freedom of choice by trying to force me to do something I don't want to do?

It is my life. Not yours. Let me take personal responsibility in exercising my freedom of choice with respect to what I choose to eat.

Good day to you!