Cleaning your Clothes Off the Grid

I saw the video below posted on Facebook and then decided to share it here. The Drumi is an Off Grid Foot Powered Washing Machine for your clothes. (Although they should totally make a version for washing dishes too.) 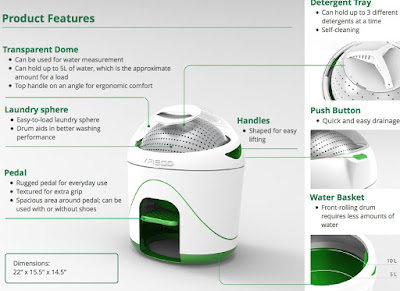 The Drumi is available for sale via http://www.yirego.com/drumi

So that does seem awfully expensive at first glance. Certainly there are other ways to clean your clothes off the grid that cost less $$$?

So how does the Drumi compare with a more old fashioned version of a washing machine, the old washboard and wringer?

How to use a Washboard:

And the Pioneer Version:

I saw other videos on this subject, but opted not to use them as I felt they didn't do that good of a job and were sometimes overly long-winded videos.

So how does that compare to the Drumi up above?

Well, I found a package deal on http://www.bestdryingrack.com/hand-wringer-washer.html which sells everything you see below (except for water and soap) for lumpsum of $439 USD. (Which means the Drumi is actually cheaper.) The one below is pretty fancy however. In theory you should be able to find an old used washboard and a wringer for significantly less.