Coronavirus Stats and Why You Should Worry

Below are the Global Coronavirus Stats, starting on March 17th until April 1st. 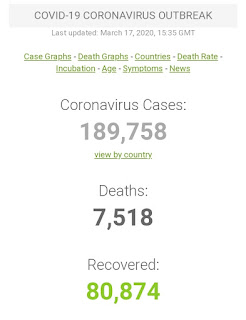 During that time period recoveries went from 80,874 to 190,933. A moderate increase in recoveries, suggesting that the virus is either deadlier than we give it credit for, or that recoveries take longer than expected.

This is the problem. We don't know what percentage of the population has the coronavirus and is transmitting it to other people willy nilly. As such it becomes difficult to estimate just how common it is, and exactly how deadly it is.

Some Countries Getting Hit Harder

Certain countries like the USA, which has high rares of diabetes and other health problems, are more vulnerable than other countries. 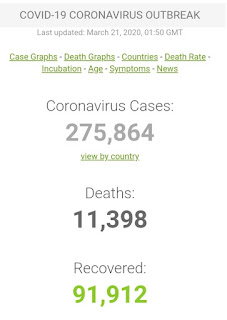 The Coronavirus has killed 34% of the resolved cases in the USA.

If you want it in simpler terms, the virus eventually kills 1 in 3 known cases in the USA. 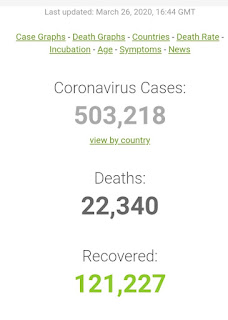 And it could ultimately become worse than that if the USA runs into a shortage of ventilators which are critical for people to beat this particular pandemic.

To their credit, China locked down parts of the country quickly to control the spread of the coronavirus.

Also China has relative low numbers of diabetes and other health problems, so their death rate is much lower.
Thus in China the virus is only killing 1 in 24 resolved cases or 4.16%. 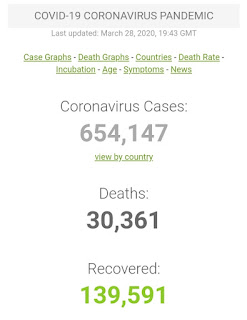 That is a huge difference in terms of how much deadlier the coronavirus is in the USA vs China.

Canada also has a similarly low death rate, partially due to having a better healthcare system, but also because Canadians get more exercise and have lower rates of diabetes and other health problems.
Thus Canada's death rate is currently only about 1 in 14.4, or 7% of resolved cases. It isn't as low as China's death rate, but it is still way better than the USA.

What is the Global Death Rate? 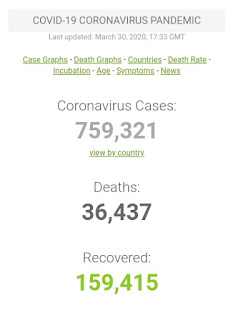 We can expect this to get a lot worse.

As the coronavirus spreads to poorer nations with poor health care systems we can expect the death rate to go up.

Even wealthy countries are going to run into shortages of ventilators, doctors/nurses who are healthy enough to treat the sick, and the materials those medical staff need.

Countries like China might even recover completely from this, having closed their borders and stomped down on the spread of the virus by using quarantines and martial law in effected regions. China has already lowered their number of cases to 2004. Two months from now they might have zero new infections and be able to resume normal life. 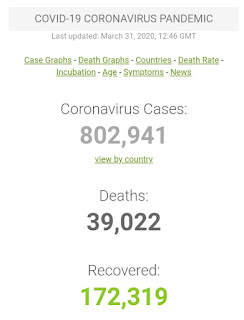 Countries like the USA, who have leaders who are unwilling or powerless to invoke quarantines and martial law, will see the coronavirus spread across their entire nation until no place is safe.

In the USA the coronavirus has already spread to every state and is multiplying within the USA at a rapid pace.

In 15 days the USA went from 5266 cases to over 205,000 known cases - and they presumably have many more cases because the USA has a shortage of tests. 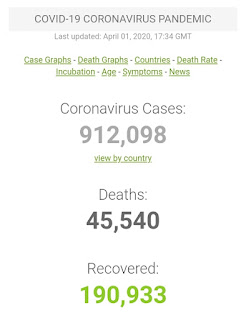 By April 16th the USA could be looking at 8.2 million people with the coronavirus, and most of them probably already have it right now and just don't know it yet because they haven't had any symptoms yet.

Eventually countries like the USA could reach a plateau, wherein the virus has spread to almost everyone, and infected almost everyone who is vulnerable to it.

In the USA, due to the older population and the number of people with diabetes/other health problems we can expect the virus to effect roughly 30 to 40% of the population.

The coronavirus/COVID19 should be expected to kill 34% of them.

Meanwhile Donald Trump, the glorious leader in the White House, has been saying that if the USA only has 100,000 deaths from the coronavirus that would be a good thing.

Yes, that would be a good thing.

We should expect him to reprise his estimates again and again, because he doesn't listen to mathematicians.

Using faulty math is just going to make the problem worse. It creates a false sense of security that less people are going to die.

What do I mean by faulty math?

Well, lets pretend you ignore the recoveries rate and only look at the total number of known cases and the deaths so far.

Looking at that you might think the death rate in the USA is only about 2%, even though the USA has 191,775 unresolved cases.

Roughly 35% of Americans are vulnerable to COVID19.

And voila, that is how faulty math predicts a much lower death rate.

This is what happens when politicians and other people who don't know how statistics work try to do math. They use *unresolved cases* as part of their metric for determining how many people will die, when they should really be using resolved cases only.

As more and more Americans die or recover from the coronavirus we will get more accurate numbers of just how deadly the virus is. Some states within the USA might have much higher or lower numbers than the national average.

Eg. I expect Mississippi / West Virginia to have really high death rates, and Colorado / Hawaii to have comparative lower death rates. (Due to lower rates of diabetes, and the fact that states like Hawaii and Colorado are more isolated.)

That is how many people I expect to die from coronavirus during the next 9 months, by December 31st 2020.

How did I arrive at that number?

The global population is 7.8 billion people as of April 2020.

Approx. 30% of the population is vulnerable to coronavirus.

Of those people who are vulnerable, I expect 1 in 10.5 people to die. At least.

We should also expect people to die from food shortages, medicine shortages, lack of safe access to doctors, increased crime/murders, increased suicide rates, and a host of other problems.

So Why Should You Worry About This
There was a source on an American news agency that was predicting that the USA will at some point start seeing over 1000 deaths per day during April.

And possibly 3000 deaths per day in May.

For comparison purposes the September 11th 2001 attacks only killed 2,977 people.

That is going to feel like a paltry number compared to the 33-45 million Americans I expect to die from the first wave of the coronavirus.

Eventually when countries start lifting quarantines and orders to self isolate we will likely see a Second Wave of the virus.

At which point that country or countries will need to self isolate all over for months to contain the virus. The countries which lift the quarantines too early are the ones which are going to be hit the hardest by the second wave of the virus.

There is also another potential problem. If a virus spreads for a long enough time period, like influenza/the Common Cold does, it eventually mutates and evolves into different versions of the virus. If it does this then there is the potential it could evolve into a deadlier version of the virus.

So it is really important we stop the virus during the first wave and wipe it out completely, so we can prevent a second wave of the virus, and also to prevent an evolved version of the coronavirus from becoming the next big killer.

Tired of Being Indoors?

Maybe it is time to go camping.

You can finally build that off grid cabin you've been dreaming of.

You have time right now, so why not just go and do it? Isolate yourself in the woods, build a cabin to your heart's content, and keep yourself safe.