Why Privacy is really important for your Off Grid Home

Okay, so you may have noticed how many off gridders also like their privacy. Usually indicated by a long laneway with lots of trees blocking the view from the road, so that neighbours cannot see what you are doing.

So why is this layer of privacy and trees so important?

So what happens regularly is when you are building an off grid home you put up a wind turbine or solar panels, or you start making a waterwheel for the stream that goes through your property - you know, to produce electricity, and your nosy neighbours see it and they don't like it.

Maybe they are jealous.

Maybe they are just jerks.

Whatever the situation, neighbours who see what you are doing frequently become noisy neighbours who complain to the township, and their complaints can sometimes draw by-law officers, the police, the fire department, and become a regular nuisance.

Are you making too much noise?

Nope, but even if you do make some noise they will likely complain anyway even if the decibels is quite low.

Is the sun reflecting off your solar panels really hurting their eyes?

Nope. But they might complain about that too anyway, just because they can.

Is your garden or clothes line really lowering property values in the region?

No. But they can complain about it anyway.

Is your greenhouse being used for growing drugs?

Nope. But nosy neighbours will complain about just about anything.

Annoying neighbours will get all up in your business and try to be deliberately as annoying as possible, in an attempt to bully you, to control your actions, to encourage you to sell the property and move...

If you have ever had a "Neighbour from Hell" situation, then you know what I am talking about.

eg. My current neighbour has been harassing my wife and I for over 4 years now and evidently wants to get us to move out, but we aren't ready to move yet - although we certainly would like to do so sometime.

If I had to live next to that moron in an off grid situation up north, I would definitely want the privacy so that he cannot see what we are doing on our property.

I would also probably put up fences and "No Trespassing" signs so that the moron cannot just wander on to our property (like the creep he is).

Best case scenario, all your neighbours are completely unaware that anyone even lives on your property. Ignorance and privacy in this case are your allies. 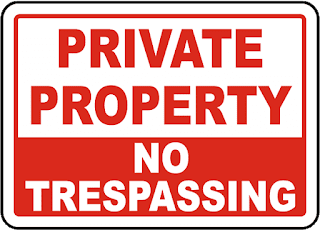 Remember that jerk neighbour I mentioned up above?

Last Monday (April 30th) he followed me out of our apartment building, started yelling at me, and then assaulted me. I called the police. Unfortunately no witnesses, but the police did tell him he is to keep his distance from myself and my family. Not quite a restraining order, but a clear warning he should leave us alone.

So yeah. "Neighbours from Hell" are not worth dealing with if you can just have your privacy instead.