"Wondering about age and value I believe it's a 1948 from the bits and pieces I have found so far on the internet. 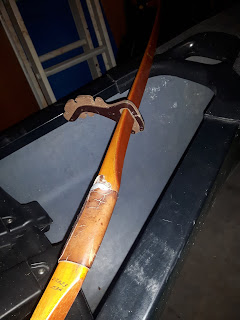 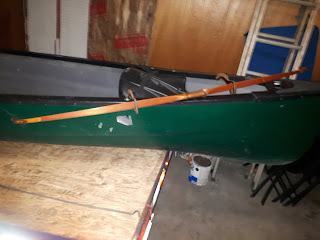 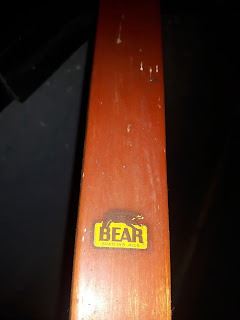 I have nearly the exact same bow, just the serial number is different and the pattern of the fibreglass is different, and mine has aluminum in it. Mine is from 1949 and still shoots perfectly.

Judging by the serial number, the decal and the fibreglass pattern (no crossweave) your bow is a Circa 1952 Bear Grizzly Static. There is also no aluminum in the limbs so it could be a late 1951 model, but most likely it is from 1952.

Value might be $150 to $200 USD. Depends on the condition of the limbs, handle, tips, etc. I would need to see about 12 to 16 photos of every part of the bow to make a detailed guess as to the value.

Have a great day!

Sincerely,
Charles Moffat
ProjectGridless.ca
BACKGROUND INFO
The small Running Bear decal on the left was used by Bear from 1948 until 1953, with the larger Standing Bear decal replacing it in mid-1953 and lasting until the 1955-56 model years. Beginning in 1955-56 Bear began using the silk-screened logo shown on the far.

Beginning in 1947, Bear Archery moved into a new plant in Grayling, Michigan. Bow sales were now beginning to soar as new archers and bowhunters entered the sport in record numbers due in large part to the successful promotions of Fred Bear.

Fred realized that he could not meet the demand which would come from these new recruits by making bows one at a time like Bear had been doing since it's inception almost 15 years earlier. So he came up with a new method of mass producing bows, finally allowing his company to meet this demand. But Nels Grumley would not accept that quality bows could be made by any other manner than one-at-a-time, so Nels left the company to go out on his own.

Upon Nels departure, Fred moved another employee by the name of Bob Meeker over to supervise the manufacturing of the new bow lines. Even though bows were then largely the result of machine work, Bob came to be considered a fine bowyer in his own right.

The first new bow model which was introduced in 1949 after Nels’ departure was the Grizzly. The Polar and Kodiak were introduced in the following year, 1950.

These bows of 1949, 1950 and early 1951 can be recognized by the lamination of aluminum in the limbs. This aluminum was scrapped from B-17 bomber airplanes of WWII, the purchase of which was arranged from the government by Glen St. Charles. The aluminum lamination on the Kodiak and Grizzly is found only in the inner lamination, surrounded by layers of maple and glass. However, on the Polar, the aluminum is found both under a layer of maple and glass, and on the outside lamination.

In 1949 and 1950 Bear was using a bi-directional glass on their bows which looks somewhat like a basket weave pattern. Then in 1951 Bear began using a new Uni-Directional glass in which the glass fibers all ran lengthwise to the bow limbs. This is a good way to tell the difference between the 1949/50 and the 1951 models. The 1951 Grizzly also began production with the aluminum lamination, but very early in 1951 the aluminum was dropped due to the high reported breakage problems of these aluminum bows.

This aluminum laminated caused two problems. First, the bows had quite a bit of handshock when shot, and as a result were not comfortable to shoot. Secondly, the large amount of shock contributed to a large number of bows delaminating. This warranty problem caused a substantial strain on the companies finances, but Fred insisted that all bows be replaced if returned broken.