The Problem with Crossbows in Toronto

The biggest problem with crossbows in Toronto (and similar cities) is that there are no places where you can safely and legally shoot them outdoors.

Because there's no crossbow ranges.

Toronto is fortunate that it does have an archery range, but crossbows are strictly not allowed at the Toronto Archery Range.

If you show up there with a crossbow then you will have angry archers calling the police on you. The police will show up and tell you to leave - and they might confiscate your crossbow and give you a $4000 fine. 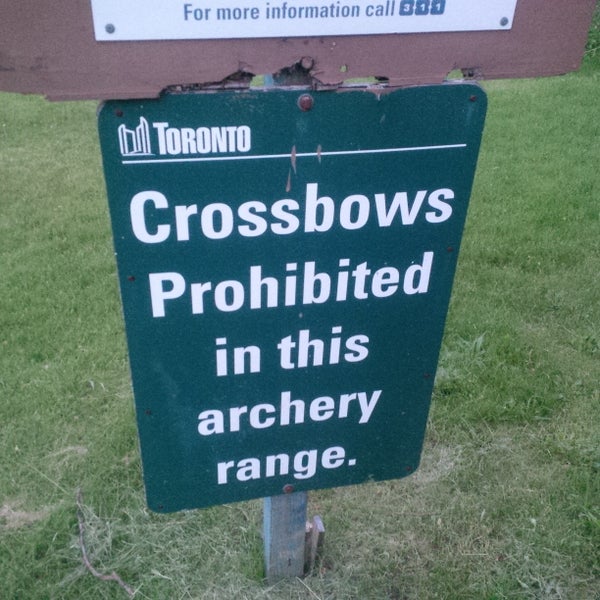 See what I mean?

So the only safe places you can really shoot a crossbow is indoors - such as a basement or a garage.

Which means you are guaranteed to be limited in how far you can shoot with your crossbow as most people don't own a basement or a garage the size of a football field.

To find a private gun range or archery range that allows crossbows you have to go outside of the city limits. Such places do exist, but you may find yourself driving for 1 hour up to the Wolf's Den near Barrie, Ontario just to pay $10 CDN just to use the range. (Or buy annual membership for $150, but you really need to be visiting Wolf's Den at least 20 times per year for the annual membership to make sense.)

There's no crossbow ranges in Toronto.

You cannot shoot crossbows outdoors (not legally) within the city limits.

And if you want to go somewhere that it is legal (and has a proper crossbow range) you're going to be spending roughly $10 per visit plus gasoline plus food expenses.

So this isn't really a problem for me because I know I get to scratch that itch - the urge to shoot something - regularly anyway. I don't need my crossbows or a crossbow range to have fun shooting at things.

Some people will also take their crossbow(s) with them when they go camping up north and then practice with them while on camping trips.

Some people have relatives who own a farm or a cabin up north and they work out a deal where they can visit regularly to practice with their crossbow.

Some people go just outside the Toronto city limits and find a field or forest where they can practice legally, in which case they should ask the permission of the land owner to be trespassing on their property. (You should ideally get their permission in writing and there should be a time limit of when you're allowed to be on their land. Sometimes an exchange of $$ is required.)

DISCLAIMER, THE PARAGRAPH BELOW IS NOT A SUGGESTION.

Some people who are desperate to shoot somewhere within the city limits have been known to just find a stretch of abandoned railway tracks and practice there, but they run the risks of people noticing and calling the police. But some people do this and presumably some of them are very careful and haven't been caught yet. This is not a suggestion. I am just pointing out that some people do this. Some of them presumably get caught.

DISCLAIMER, THE PARAGRAPH ABOVE IS NOT A SUGGESTION.

My advice - my suggestion - is that if you really want to shoot at things within the city limits then you should just buy some archery equipment - or get archery lessons - and then just shoot at the Toronto Archery Range. That way you're doing it legally, you don't to travel really far, and archery is a lot of fun. This way you won't have to worry about the legal stuff that comes with being a crossbow enthusiast.

And you can still shoot your crossbow in your garage or basement or when traveling outside the city limits.

Honestly, all the extra legal baggage and a lack of places to shoot crossbows legally in Toronto means you are simply better off not owning a crossbow. It is unfortunately the situation you are living with if you live in a city like Toronto and enjoy shooting them.

Email ThisBlogThis!Share to TwitterShare to FacebookShare to Pinterest
Labels: Crossbow