The Who, What, Where of Various Ontario Fish

Made this list for determining which fish were available in various parts of Ontario and what their habits / habitats are. 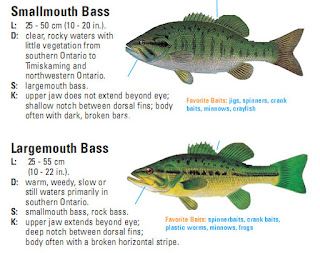 BASS, SMALLMOUTH
Average sizes: 1 to 3.5 lbs (.45 to 1.58 kg)
Habitat and temperature: Live in deeper water, often around rocks, sand, or gravel areas. They prefer water temperatures under 70°F (21°C).
Biology: Spawn in late May and June in fanned-out bottom depressions. They deposit their eggs in shallow, gravelly areas. Males guard eggs and fry.
Ranges: Species range from Manitoba eastward along the north shore of Lake Superior, continuing as far north as Temiskaming, and then south.

CRAPPIE, BLACK
Temperature and habitat: Spawn in shallow, weedy areas when water temperatures reach 68°F (20°C), usually May through June.
Biology: Males guard eggs and fry. For much of the year, they suspend offshore, but move to the edge of weedlines, points, or shoals, or rise to the surface to feed in low-light conditions.
Range: Lower Northwestern Ontario, the Great Lakes and connecting waterbodies to Georgian Bay and the North Channel. Spreading inland north to Parry Sound through connecting systems such as the Rideau and Trent-Severn waterways.

MUSKIE
Average sizes: 10 to 20 lbs (4.5 to 9 kg).
Temperature and habitat: Often found in water up to 78°F (25.5°C), but big muskie, like big northern pike, prefer cooler water. Optimum spawning temperature is 55°F (12.8°C). Lives in a range of habitats, from small lakes to the Great Lakes, usually near cover or structure, but will suspend over deeper water.
Biology: Spawns in spring later than northern pike in many of the same vegetated flooded areas. Can hybridize with northern pike to produce sterile, fast-growing "tiger" muskie.
Range: Extreme northwestern Ontario and roughly south from Sault Ste. Marie, including parts of the Great Lakes (except Superior) and Lake St. Clair.

PIKE, NORTHERN
Average size: Between 4 and 10 lbs (1.8 to 4.5 kg). Northern pike more than 20 lbs (9 kg) are considered trophies.
Temperature and habitat: Prefers water around 60°F (15.5°C) on rocky reefs and the edges of weedbeds.
Biology: Spawns in flooded areas and back bays in spring. Fertilized eggs are scattered randomly.
Range: Throughout Ontario in lakes and rivers of all sizes.

TROUT, BROOK
Average size: Eight to 12 inches (20 to 30 cm) in small streams, 1 to 3 lbs (0.45 to 1.36 kg) in inland lakes.
Temperature and habitat: Prefers temperatures below 68°F (20°C) in clean, well-oxygenated lakes and rivers.
Biology: Spawns in fall over upwelling areas of gravel in lakes and streams. Grows quickly and lives about five years.
Range: From southern Ontario to Hudson Bay tributaries.

TROUT, LAKE
Average size: Two to 10 lbs (0.9 to 4.5 kg).
Temperature and habitat: Around 50°F (10°C) in clear, deep lakes.
Biology: Spawns in fall over boulders or rubble shoals in lakes. Can live 20 years or longer, hence can reach a great size.
Range: Much of Ontario, except James Bay and Hudson Bay Lowlands.

WALLEYE
Average size: Between 1.5 and 3 lbs (.68 to 1.36 kg). It is, though, common to catch walleye topping 10 lbs (4.54 kg) in Ontario.
Temperature and habitat: Prefers stained waters in the 60 to 70°F (15.5 to 21°C) range, usually on hard, rocky bottoms, but also frequents weedbeds in shallow, fertile lakes.
Biology: Spawns after ice-out in rocky rivers and over wind-swept, rubble-strewn shoals and shorelines. Walleye are prolific and scatter eggs randomly.
Range: Throughout Ontario.

WHITEFISH
Average sizes: 4 lbs (1.8 kg).
Temperature and habitat: Can be found in big cold-water rivers and lakes. They generally feed on or near bottom.
Biology: Spawns during the fall.
Range: Mainly in cold northern lakes. Thrives in many of the Great Lakes as well.

Email ThisBlogThis!Share to TwitterShare to FacebookShare to Pinterest
Labels: Fishing Off the Grid