Antler, a good place to try venison in Toronto 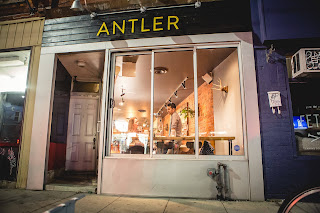 "Antler" is a local Toronto restaurant and bar which serves up a variety of options on its menu, including vegan and vegetarian dishes, as well as locally sourced ethical meat such as beef and venison. Venison, for those who don't know, is deer meat.

Venison is tastier than beef, but also more nutritious. Deer thrive in the forest, which also means that consuming venison has a significantly lower carbon footprint than conventional cattle livestock.

As such if a person is curious about trying venison, wants a healthier / more ethical alternative to beef, then venison is certainly an option. Also since Antler does source a variety of other ethically grown meats, it is also a good place to try those too.

Myself I have had both venison and moose meat. Both are very tasty, and I would definitely eat them again.

Antler has both a brunch and a dinner menu with a variety of options on both, and I am currently thinking of taking my wife there as a celebration for her graduating from law school. (We might end up going somewhere else, as it will likely come down to my wife's decision. It is her graduation after all, not mine. But maybe I can go to Antler next year for my birthday or some other event.)

Might even take our son with us. He needs to be trying new foods. (He will be be 10 months old a week from now.)

While browsing the dinner menu I also noted the wild boar. Ooooooo! Something I haven't had before, sounds like something to try.

Antler recently got a lot of media attention because of vegans protesting outside of the restaurant. One of the owners, who doubles as a chef/butcher, got frustrated with the vegans constantly and repeatedly protesting outside his restaurant and decided to butcher a leg of deer in the restaurant window for the vegans to watch - you know, to spite them and to send the message that he and his business partner are not about to change their ways.

The vegans, who were effectively trying to extort the business, recorded the butchering and it went viral online and in the news media. And it backfired on them. "Antler" is now more popular than ever and as mentioned above, now requires reservations.

It is so popular I hope they end up opening a second restaurant. The vegans will be truly upset if it comes to that.

Personal Note - I have nothing personal against vegans myself, but I do wish they would mind their own business when it came to promoting their beliefs and not be all Hitler (Hitler was a vegetarian) on trying to force their beliefs on to others. In fact, I have a personal rule that every time a vegan tries to force their beliefs unto me I go out and eat a rabbit, a duck or some other cute tasty animal.

So here is the video, as posted on WatchMojo (which tells you how viral the clip became).

Later the owner/chef/butcher Michel Hunter became internet famous and has since done a number of interviews. Like the following interview with Joe Rogan, who is pro-hunting.

Seeing as I am also trying to build Project Gridless as a YouTube channel, I am also going to reach out shortly to see if we can organize a video interview. So check back in a few weeks and we shall see if I managed to score an interview with Michel, who is really busy these days thanks to all the extra publicity.

So I did get a response, but they are no longer doing interviews and apparently waiting for the fuss to die down.

So here is my thought... wait a few months, contact them then and see if an interview can still be arranged - and perhaps focus on a specific topic such as "The Proper Way to Butcher a Deer" or some similar useful topic.