Off Grid Greenhouse Designs, Research Ahead of Time

So when it comes to building your own greenhouse, I firmly believe people should do more research about the type of greenhouse they are building - and pay attention to its architecture, because a lot of people are being lazy and ignoring various fundamentals of architecture and engineering.

In the video below you will see the owner of the greenhouse explaining what went wrong with his greenhouse. His greenhouse is basically useless during the winter because he made the structure in the shape of a half cylinder, which means the upper part of the roof is almost flat and collects snow. What he should have done is made the roof peaked in a sharp triangular shape, so that the snow is forced to slide down the sides rather than collecting on top of the roof.

In the next video you can see how easy it is to build one of these half-cylinder greenhouses... which is great if you don't mind snow collecting on the roof. The clip is from "This Old House", an American TV show based in Boston, where they don't get as much snow as Northern Ontario does. Boston gets average annual snowfall of 43.5 inches. Sudbury meanwhile gets average annual snowfall of 103.7 inches. And then there is the issue of accumulation. In Boston, the snow is more likely to melt within a few hours or days. In Sudbury, the snow just piles up and rarely melts until Spring. Thus a greenhouse in Boston doesn't really need to worry about snow accumulation, but a greenhouse in Ontario does need to worry about it.

But there is actually a solution. DO MORE RESEARCH BEFORE YOU BUILD!

And if you are living in northern climate, then you need to choose a design that will cause the snow to slide down the sides of the structure. 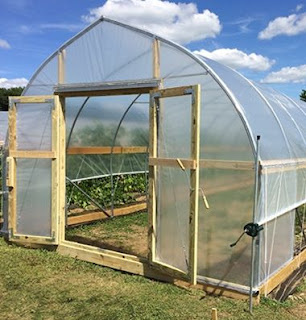 Take the example on the right. Is it an improvement over the half cylinder design? Yes. Could it be better, also yes. The top and sides of the structure could be a sharper and steeper peak.

The design is very similar to the one shown in the "This Old House" clip, but it can definitely be improved by making the roof taller with a steeper peak so that snow is more likely to slide off with ease.

Plus the taller the structure is, the more sunlight/heat it captures and traps inside the greenhouse, and you have more room for shelves up higher for a 2nd layer of plants. 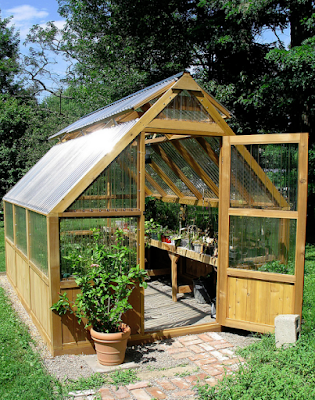 #2. The Sharper Peak Greenhouse with Vents

So the builder of this greenhouse went for a more wood design, but they also designed the peak with adjustable vents so they can control the amount of heat being trapped in the greenhouse.

The wood structure with bricks, gravel and cement around the base suggests this is meant to be a more permanent structure, so they decided to be more thorough with their design.

The roof has a nice 45 degree angle peak, which should be excellent for keeping the snow from accumulating.

The extra cost of all the wood in this design means that they likely chose to make the greenhouse smaller for budgetary reasons, but on the plus side this design should last a lot longer.

The peak does not have to be in the middle of the greenhouse. Indeed, if you are building the greenhouse next to an existing structure, you could just make the peak on one side so that all the snow falls down the other side. 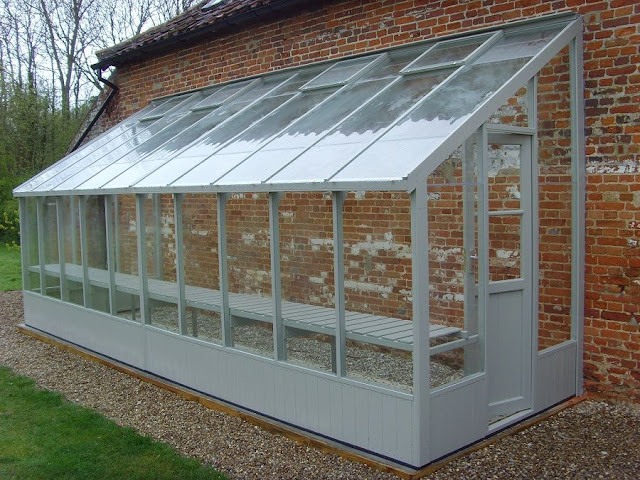 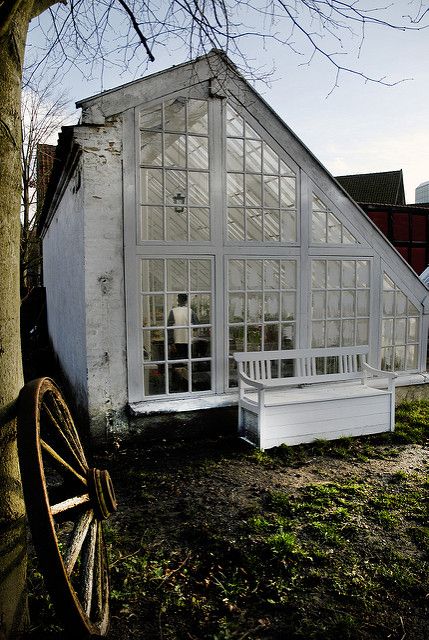 You aren't stuck using a single peak running the length of the greenhouse. There are many other shapes you might consider, such as a pyramid-shaped greenhouse. It will take more effort to design and build a pyramidal greenhouse, but the single sharp pointed peak will definitely keep the snow off of it. 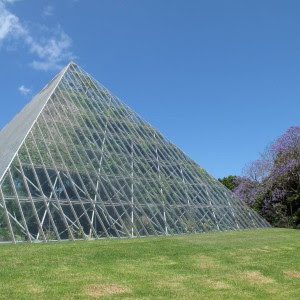 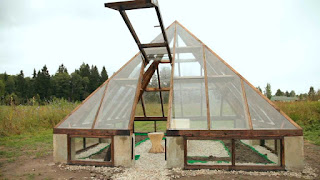 This particular design works well in warm climates, but it won't be so good in a northern climate because the top of the roof is not steep enough. A way to fix this would be to make the top of the structure a sharper peak rather than a rounded roof. 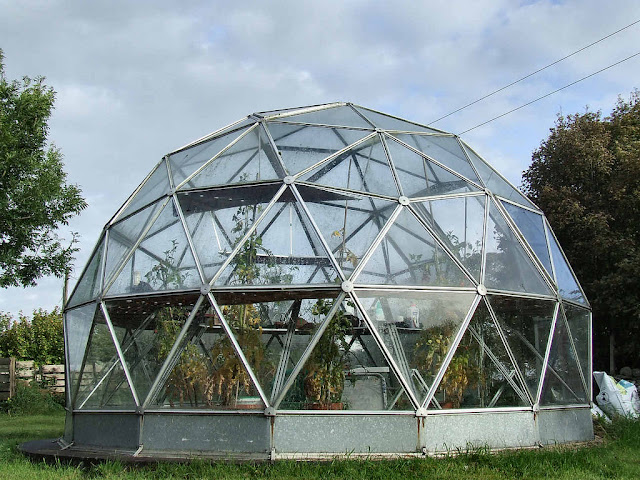 The example below fixes the design problem mentioned above by adding an extra section for a peak at the top, which also functions as a vent. The design is also fairly easy to build, and part of the structure is brick for added permanence. 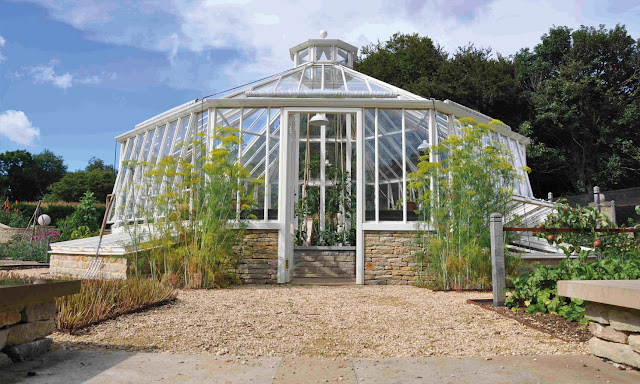 OFF GRID ISSUES FOR GREENHOUSES 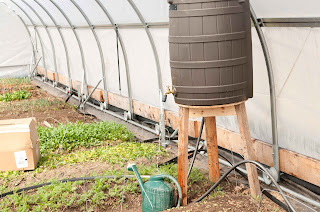 Once your greenhouse is built, you will need to determine what amenities you want for it, such as water and if you think it needs electricity.

Rainwater off the sides of the structure could be collected into rain barrels, and thus used for the plants.

Ideally you should place any such rain barrels inside the greenhouse to prevent it from freezing during the winter, with pipes leading up to troughs. A valve and pipe system could be constructed to prevent water from freezing inside the pipes, but also for distributing water to the plants.

Some people will want electricity for venting the space, but that can be accomplished without using electricity by opening doors, windows and ceiling vents. If heat is still an issue you can also soap up the walls and ceiling of the structure, as the soap residue will block out sunlight.

Some people also talk about using a gas heater, electric heater or even a wood stove to keep their greenhouse warm during the winter, but if you are resorting to such things then you clearly designed a low efficiency greenhouse that is not insulated enough.


If you need more insulation, during the design process you could have simply added an extra layer of plastic with some space in between the two layers of plastic. This barrier acts as an insulator to keep the interior of the greenhouse warmer.

The pros and cons of a double layer inflation are:
Having the 2nd layer of plastic with a space between already improved insulation, and helps protect from wind damage. If the structure has a steep peak then snow really is not an issue anyway. Using electricity to inflate it seems rather unnecessary to me if the structure itself is designed correctly to prevent snow from accumulating in the first place. Inflation seems more of a thing to do if you were lazy during the design and building process and didn't think to add a steeper peak to keep the snow off.

Some people are just making things harder than they need to be.

So what design would I choose?

Honestly, it depends on the size of the space and the budget I have allocated for the greenhouse, but I would probably go for the Asymmetrical Peak Greenhouse design and have it facing south. I would make the roof very steep with lots of room for shelves above. By making the structure taller, it adds more room for square feet of shelves for "growing space".

* So that estimate for feeding a family of 4 during the winter is based on the idea of each person consuming an average of 4 ounces of veggies per day. 16 ounces is 1 lb, so you need to be growing an average of 1 lb of edible food per day during the length of the winter. Different foods grow at different speeds and yield different amounts of food, so you really need to be smart/wise about which foods you choose to grow in order to get a greater yield per square foot of greenhouse garden.

Giving myself 4 feet between the shelves to walk and carry tools, this greenhouse would need to be a minimum of 12 feet wide and 15 feet long, plus the dimensions of the structure itself. So lets make it a bit bigger and go for 15 feet by 20 feet, just so there is even more space.

And if we make it slightly taller, maybe fit in another set of 4 feet wide shelves to grow 33% more food, since 8 shelves is clearly better than 6 shelves.

Another way to improve the structure would be to make it square, say with an interior space of 20 by 20 feet. With that shape you could have 2 aisles for walking (4 feet wide each) with 3 rows of shelves. So instead of 6 shelves, 9 shelves... and if tall enough for 4 shelves per row, then 12 shelves.

By then you are looking at...

That would be more than enough space to grow all the veggies a family of 4 eats all year round, even if some of the plants have terrible yields. You could be growing it and giving away excess food to friends and family members and guests.

20 x 20 feet of space isn't unreasonable either. Many backyards in cities have 400 sq feet of space available. In the USA it is true that backyards are shrinking, but many people would not have too much difficulty fitting in a small or medium size greenhouse into their backyard if they wanted to - especially anyone who lives in the countryside and has ample space.

So yes, for my purposes an Asymmetrical design facing south, 20 x 20 feet, and I could have 3 shelves in the south row, 4 shelves in the middle row, and 5 shelves on the north row. That would provide all the veggies my family and I would need, with lots left over.

Anything left over I could turn into jams/pickles/etc and give away or sell.

How do you fit the Plants in?

There are many ways to organize your shelves and space inside the greenhouse, so you will want to consider your options here too. The design below use PVC tubes and works well with any greenhouse that has slanted walls. 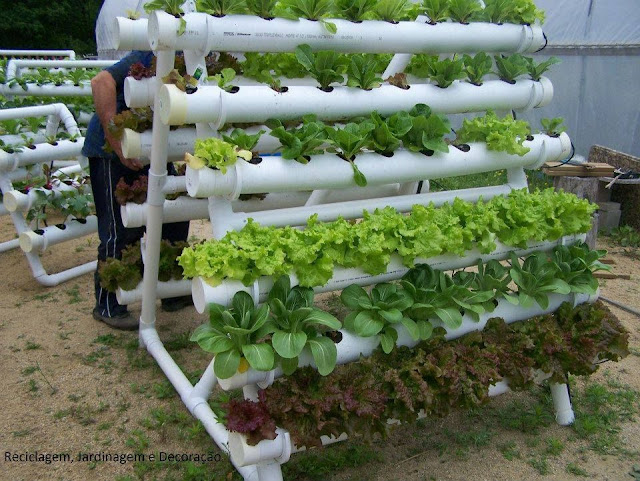 Or you might even want the shelves to rotate with a crank so you can get easier access to shelves that are otherwise harder to reach.