DISCLAIMER - Tesla has not paid me any money to mention or discuss (or criticize) their products. I just happen to like what they are making, although I do not like everything as you will notice if you continue reading. 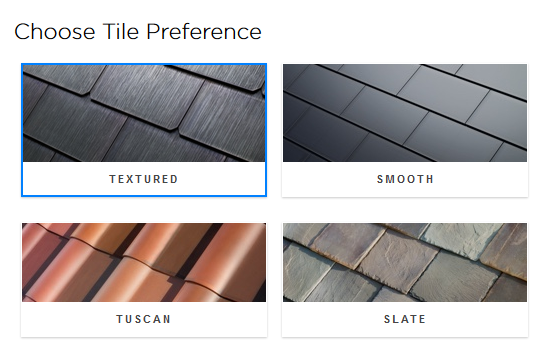 So one of the innovations coming out of Tesla (not just an electric car automaker) is their new solar panels which feature textures and different colours, so that they look like regular roof tiles.

This way the whole roof of a house can be one giant interconnected solar panel (or solar roof as Tesla likes to call it). So for example the image below shows a home with a Tesla Solar Roof, not just on the main structure, but also over the garage on the right side and the solarium on the left side too.

To me this is a big innovation, because it means that solar panels don't have to be ugly things you stick on the roof of your home. They can simply BE the roof. The whole roof, and neighbours will never know you have solar panels unless they recognize your roof as being a Tesla product.

I especially like the textured and slate versions. Those do look pretty nice.

Tesla also has video on their site at https://www.tesla.com/en_CA/solarroof which shows the durability of the roof tiles, showing traditional roof tiles breaking under a 5 cm hailstone is traveling 160 km/h on impact, whereas the Tesla roof tile doesn't break. So that is a nice bonus.

What is Tesla's Goal?

Thus the end goal is to make homes that are off grid, but also fuel the electric car at the same time.

So how expensive is the Tesla Solar Roof?

Well that is a very good question.

On Tesla's website you can pay $1330 CDN (refundable) to reserve your position to buy and install a solar roof on your home. Basically you are in a line of waiting customers, and you have to pay just to be in the lineup. They don't actually mention how much it costs, likely because it varies on the size of your roof.

But it would be nice if they listed the price of a 1 meter by 1 meter tile. Or a cost per square foot. Something like that.

It probably is not that super expensive however. $100 per square foot seems like a rather large amount to be paying.

I like the look of the product, but if they want to win customers over they really should be mentioning the price so that people can compare to other solar manufacturers and to wind turbines, hydro-power, etc.

But this is something I have noticed about solar companies. A lot of them don't like to list their prices online, which in my opinion deters people from wanting to buy from them in the first place.

If they want to eventually start selling their products to a mass market audience, they really need to start listing their prices in a manner so that customers can compare prices and consider their options.

Tesla is not the only company selling solar roof tiles or "solar shingles" or photovoltaic shingles. Whatever you want to call them, they have been on the market for years. Five of the biggest companies that make them are:
Tesla is basically the car and solar equivalent of an iPhone. They make things which are desirable, but overpriced when you consider that other companies make equivalent products for less cost but without the sexy name on the product.

Do I like what Tesla is doing by making solar power sexy? Yes.

But I also think they need to be more honest and open about their prices. The lack of transparency scares away skittish customers.