I don't usually talk about politics, but this bit really effects people who want to off grid and use solar power. 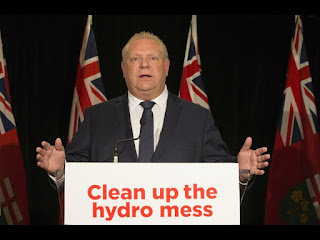 Hey Ontario, are you upset about your hydro bill?

Doug Ford is going to sell Ontario Hydro (and Ontario's stake in Toronto Hydro, Hydro One and other companies).

15 years ago Mike Harris left Ontario with a fiscal mess and had sold off major chunks of Ontario's electricity grid, namely by privatizing the sale and distribution of electricity - which only led to higher electricity rates.

That sell off combined with the murder of Dudley George and the Walkerton E-coli Massacre, led to Mike Harris's unpopularity and 15 years of the Liberal Party trying to fix his mess.

Unfortunately, they couldn't backpedal on the sale of parts of the electricity grid. That mess is here to stay.

So when is this coming?

Doug Ford has on numerous ocassions talked about how "great" it would be if Ontario sold off Ontario Hydro. He thinks it would result in cheaper rates for customers. Ha, what a lie that is.

He has not set a timeline however for when he intends to sell off Ontario Hydro and its related components.

What he is doing however is:

So this is things he has already done in the first weeks of being in power. And for the off grid community (and people who want to go off grid) the 2nd one which I highlighted in red is actually really important, because that is the one which effects people who want to go off grid. Those rebates for installing solar panels made them more affordable and allowed homeowners a degree of flexibility when it comes to choosing a larger solar panel system for their home.

The rebates were so important that they lowered the cost of solar power in Ontario, such that manufacturers could focus more on mass production - which created jobs in Ontario's solar industry for both manufacturing, for sales, and for installation.

With the rebates gone, that is going to hurt jobs in Ontario's solar industry and it is going to raise prices.

Coupled with selling off Ontario Hydro and rising electricity prices, the people of Ontario are going to be looking for alternatives.

The obvious alternative is to go off grid and produce your own electricity. But without the rebates, that option just got more expensive.

Thus people wanting to go off grid in Ontario now have to weigh more affordable options like:


And those options don't work for many homes.


Thus solar, quiet and nigh invisible solar, becomes the one option that homeowners can put almost anywhere that they have access to peak sunlight.

So cutting the rebates for solar ahead of a strategy for selling off Ontario Hydro, well that is just going to put Ontario in a position to be taken advantage of by whomever ends up buying the electricity grid.

Charles Moffat was, at one point, a door to door salesman for Direct Energy, a company which sold electricity and gas to homeowners. A job he loathed and later quit. He has since set himself a goal of someday going off the grid completely. Eventually.