How to Fix a Dryfired Crossbow

Okay so someone contacted me recently regarding a crossbow which had been dryfired and was wondering if I could fix it, since I currently fix compound bows.

So I normally don't fix crossbows and I made the mistake of mentioning it to my wife, and she vetoed the idea (besides the point I already have 3 crossbows in the house and have a hobby of building them). Apparently she puts her foot down on having any more crossbows in the house. My limit is 3. No more than that.

Below are several photos they sent me of the crossbow which had been dryfired. 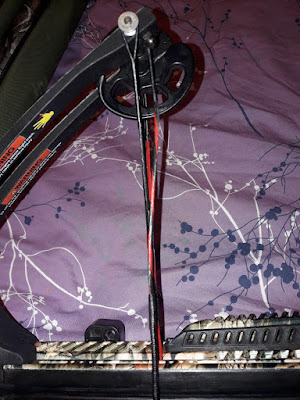 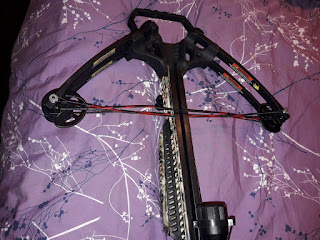 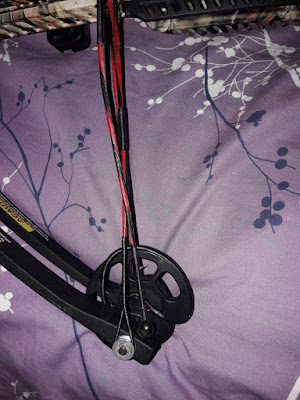 So I might not be able to fix it myself, but I can certainly provide instructions for HOW TO FIX IT and that way the owner can fix it themselves using the instructions below.

How to Reset the Bowstring a Dryfired Crossbow

Or... How to Remove an Old Bowstring and Add a New Bowstring on a Crossbow

Honestly the steps below work for both.

Step One - Reduce the Poundage, if possible.

On a compound bow there is typically a way to reduce the poundage. You do this with a Allen key (aka Hex key) at the point where the limbs meet the stock. See the photo below. However many crossbows don't necessarily have such an option. However if it does, now is a good time to use it.

If the poundage is low enough the bowstring should be significantly less taut and more easy to remove. Skip to Step Three if you were able to do this. If the bowstring is still very taut, you are going to need a bow press, in which case go to Step Two. 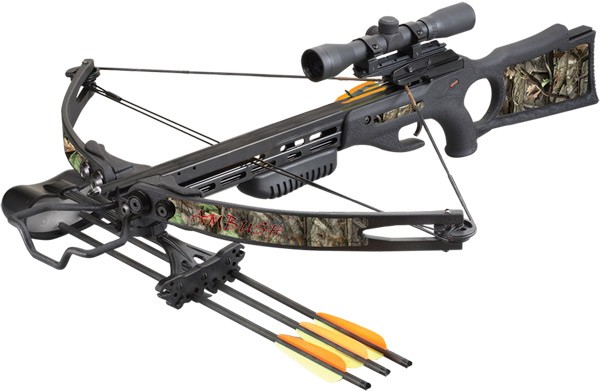 Step One B - Use a Dummy Bowstring.

I am adding this as an optional way to reduce the poundage. This is a method you can do if you don't have a bow press. It is a bit more of an unorthodox method, which is why I am making this section in different colours of text, to note that people should use caution when using this method. This method only works on crossbows however. This method won't work on a regular compound bow unless you also have a tillering stick (totally different topic, tillering sticks are used by bowyers during the tillering process, but that is something to talk about another day).

What you do is get a nice long bowstring that is strong enough for your crossbow and place it in a loop going around the axles, tying the ends together in a Reef Knot (aka, a Square Knot). It should be completely slack and extra long so that the string can reach about 3/4s or 4/5ths of the way to the cocking mechanism without even pulling.

Then you pull back the dummy bowstring the extra 1/4 or 1/5th to a cocking position on your crossbow, thus causing your normal bowstring to now become slack - and thus make it easier to remove or adjust.

When you are later ready to remove the dummy bowstring, simply pull back on the string with your hand to make it tight, hold on, release the trigger and hold it down, and then slowly let down until it is completely slack again. Loosen and remove the Reef Knot, keep the dummy bowstring for the next time you might need it.

Step Two - Place the Crossbow in a Bow Press and Tighten.

If you cannot reduce the poundage then you are probably going to need a bow press. Pretty much a necessity with a lot of modern crossbows. If you decide to use this method it is probably best you skip Step One entirely.

I recently wrote a post about Five Ways to Make a Homemade Bow Press, which I recommend reading as it is certainly cheaper to just build a bow press than go out and try to find / buy one.

The trick about bow presses is that you might only need it the one time. So it doesn't really make any sense to buy a $200 bow press just to use it one time.

Once tightened, your bowstring should be slack and ready to be removed.

See the loop on the cam in the 3rd photo? Not the loops that fit on the axle of the limbs, but the one which loops like a 9 on to the middle of the cam itself. Start by removing that and unwind or untangle it from anything.

Depending on the situation you might only need to partially remove the bowstring. If this is the case, awesome. It should be a fairly simple task of removing one section of the bowstring, rewrapping it around the cam, and replacing the loop.

eg. If you can get away with leaving parts of the bowstring still fed through the stock, good, just leave that in place. Basically if you can leave much of it already in place, please do. Less work for later.

The cam loop should always be the first thing you remove, and the last thing you put back in place.

Note that I said "New Bowstring". The steps described on this page work for either resetting your old string or adding a new one. This is a good point to decide whether you want to keep your old bowstring, or use a new one. If there is heavy or medium fraying on your bowstring, probably time for a new one. Minor barely noticeable fraying? Not such a big deal. Crossbow bowstrings are rated for many multiple times the poundage of the actual crossbow. If one strand snaps it is not biggie. It is when multiple have snapped that you need to start worrying. (Sort of like the front and back brakes on a bicycle, ideally both should work - but if one doesn't work then the other set of brakes should save your life.)

Okay, so this is the tricky part. Modern compound crossbows do not make this part easy.

Step Five - Loosen the Bow Press or Retighten the Poundage.

Really depends which steps you did, Step 1 or Step 2 or both. Or Step 1 B. Whatever.

Once your crossbow is out of the bow press / back to its original poundage you should find a safe place to fire a few shots with it (with actual crossbow bolts this time) to make sure everything is in good working order.

Probably the most important step.

The correct / safe way to uncock a crossbow is to load a bolt and fire a shot into a target (or into a sandbag, a good patch of dirt with no rocks, etc). Never dryfire it.

Even if a manufacturer is bragging about how great and durable their crossbows are, you should never ever dry fire one. You are just asking to be the exception, the one person who has theirs break. Don't be a dumbass and don't make yourself into a statistic.

This is one of the reasons I really like Excalibur Crossbows - they use recurve limbs instead of cams. If the bowstring ever comes off, then you can more easily place it back on. Easy to fix, super powerful.

The whole point of compound crossbows is to make them more compact, but to me I would rather have something that is easy to repair. As someone who makes my own crossbows, they are also easier to build if they are straight or recurved limbs, with no cams. 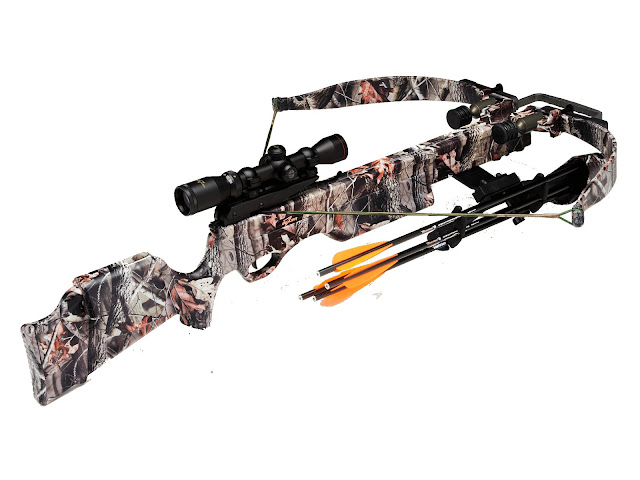 Sometime in the future I should try making a double limbed crossbow (similar to a Penobscot bow). That should be fun.

Lately I keep thinking of kewl science fair projects I could do with my son in the future when he is older. I think that would be an interesting science fair project... not sure if schools would appreciate kids bringing crossbows to school for a science fair however, even if it was a bizarre looking Penobscot-style crossbow.

Considering how schools already have so many easily upset snowflakes these days, I can only imagine what it will be like 10 years from now.

Probably should build a catapult or trebuchet instead. That would be okay. Or maybe a ballista, like the Roman style ballista below. Oooooo! 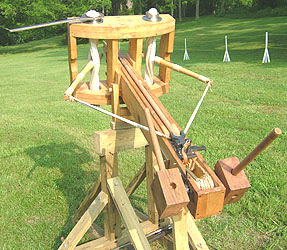