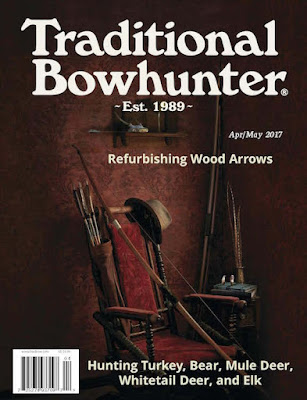 Okay so I have quite a few archery books, but honestly - I have waaaaaay more magazines on the topic, mostly pertaining to bowhunting.

So I decided today to make a list of all my magazines thus far. (I have a subscription to one of them.)

I should also note that an article I wrote years ago was published earlier this year in Archery Focus Magazine. Which is ironic because I have never even SEEN that magazine in person in Canada. No stores in Canada seem to sell it. I managed to do this small feat of archery thanks to knowing the editor socially, he is a fellow archery instructor I have consulted with in the past. (I do have a great book of his though, "Precision Archery", which I totally recommend buying, regardless of what style of archery you practice.)

So back to the topic at hand... Let me grab a pile of magazines and lets get this Archery Magazine list started.

Note - In the future I want to add more notes to this page about articles I found to be particular useful / interesting. For now I just want to make the list. I can add detailed notes later when I have more time.

Traditional Bowhunter Magazine
2018 Dec-Jan - Food Plots, Hawaiian Quiver, Arctic Gear (they send out upcoming magazines well ahead of schedule. It is November and already I have received the Dec-Jan issue in the mail.) 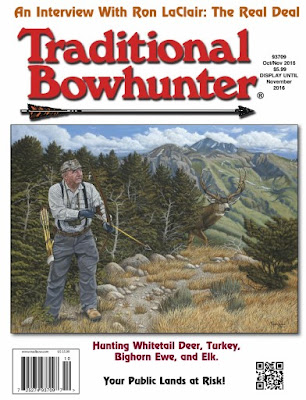 2016 Oct-Nov - I really love the cover painting on this one. I even wrote emails back and forth to the editor about it.
* I seem to have misplaced Jun-Jul and Aug-Sep 2015, I cannot find them.*
2016 Apr-May - Backing a Bow with Turkey Feathers

2014 Oct-Nov - Lovely painting on the cover
2014 Aug-Sep - Simple Spine Tester
Notes - So Traditional Bowhunter is the only one of the magazines that I have a subscription for. So I know the magazines that are missing are *somewhere*, I am just not sure where. Possibly tucked into a bigger archery book. Perhaps under some other book, alone and forgotten. Maybe all 3 of the missing magazines are hiding some place together. Won't know until I find them.

As you may have guessed Traditional Bowhunter (aka TradBow) publishes 6 times per year. I forget what the subscription cost is, but it is well worth it.

Note - For people who are into bowmaking, TradArchers' World is good magazine to be reading. Published 4 times per year this is a magazine I should probably get a subscription to, but I have not bothered as of yet to do so. Probably a good idea to get it as it has more articles about bowmaking and equipment making than Traditional Bowhunter does.

Note - Bowhunting World Magazine (BWM) publishes equipment guides multiple times per year. I really only buy it for the equipment reviews, which are mostly related to compound bows. I do however wish that they only published one big guide only once per year instead of splitting it up. I wouldn't bother getting a subscription to this one. I usually only try to buy a compound bow equipment guide once per year.

Note - While Petersen's Bowhunting (PBM) does offer annual equipment guides (usually during the winter), they also sometimes have useful articles about bowhunting skills and tuning compound bows. (Maybe someday I might publish something in their magazine about compound bow repair, as it seems like a topic many compound shooters could learn about.)

If I had to choose, I think the PBM's equipment guides are better. They also have more actual useful archery tips when compared to BWM. It might make some good sense for me to get a subscription to PBM. 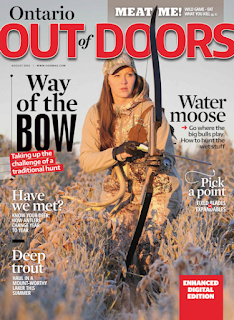 Note - I normally don't buy OOD Magazine. I made an exception because of the title article being promoted on the front cover. Most of the time the magazine is about rifle hunting and fishing, so I usually skip it. I probably should read more articles about fishing however, so there are some benefits to that I suppose.

A little goal for me to do... try to publish articles in all the magazines listed above. I have already scratched off Archery Focus Magazine from the list, so might as well try and see if other people like my writing.

Email ThisBlogThis!Share to TwitterShare to FacebookShare to Pinterest
Labels: Archery, Books, Hunting Food Off The Grid