Are Compound Bows Superior to Recurve Bows? - I have seen this topic / argument come up regularly on Facebook / archery forums.

Usually the argument will be brought up by a compound shooter who has zero respect for recurve bows (has never shot one, doesn't know how to aim without using a sight, etc).

To me recurve bows are like well maintained sports cars. They are beautiful, fast, and if you take care of them they last a very long time.

Compound bows in contrast are like pickup trucks that break easily. They break down over time and if not repaired regularly, the owner eventually decides to buy a new one and get rid of their old one.

This is why it is sometimes so difficult to find vintage compound bows - because so few people take good care of them, know how to fix them, or hire someone else to fix them. Which means that they eventually throw out their old compound bow - as garbage.

Below - A photo of two of my vintage compound bows, a 1970 Model T Jennings next to a circa 1973 Black Hawk Chief Scout. 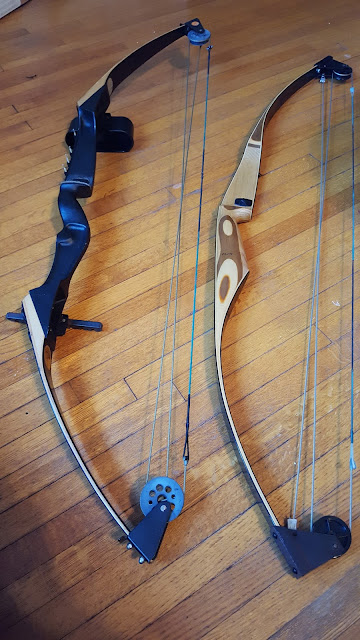 So are compound bows superior in every way? No. Speaking as someone who is a "Compound Bow Repairman", they are most definitely not superior.

And modern compound bows? They break down so easily the average compound shooter buys a new bow every 2 or 3 years. They prefer to throw out their old bow rather than perform maintenance or get repairs done by a pro.

You know how a car depreciates in value after you buy it? As per the chart below: 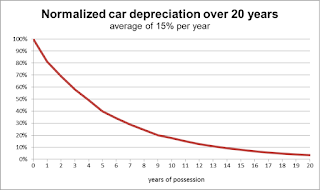 With modern compound bows they depreciate even faster. Think 50% of the value lost in the first year alone.

So lets say you bought a brand new compound bow for $1,000 in January 2017.
And this assumes the compound bow in question is in good working order. If it was dryfired, damaged in some way, re-painted by an amateur, modified in some manner - it may have lost a lot more than in terms of value.

In contrast recurve bows tend to keep most of their value. If you bought a $1,000 recurve bow, five years later it is probably still worth at least $800.

So in terms of durability and long term value, compound bows really are not that good. They break too easily and they lose 60% of their value in the first two years.

So what about speed?


The top speed of compound bows are typically in the 300 to 350 fps range.  Although this really only benefits long distance accuracy, and archers are typically only accurate at long distances if they have both good form and a steady aim. So while extra fps arrow speed is beneficial to someone who is already a good shot, to someone who is not it only serves to help them lose their arrows faster.

The second "speed issue" here is loading and aiming time. Compound bows are actually slow to reload, draw and aim. A recurve archer could fire multiple shots in the time it takes a compound archer to load, draw, sight the target, doublecheck the level, make sure their peep sight is in line correctly with the sight housing (a little trick which boosts accuracy an extra 1/2 inch at 20 yards), doublecheck the sight is on the target, and then finally shoot. So compound bows are slow... not as slow as crossbows, but still really slow.

So what about speed-power consistency?


This is actually where compound bows excel. Regardless of whether it is used by a beginner or an experienced archer, a compound bow will provide consistent speed and power - which in turn boosts accuracy. To do the same thing with a recurve bow requires years of experience and proper training.

So what about accuracy?

So what about ease of use?


Overall, a beginner archer will typically find that a compound bow requires comparatively less skill to get accuracy at short distances. Less skill, less form, less training required. Compound bows are not as easy as crossbows - crossbows are so easy they are basically point and click - but they are pretty darn easy.

The joke amongst traditional archers is that compound bows have "training wheels" on them. That is how easy they are to use. Brain dead easy. The only real challenge comes when the archer tries to use it at longer distances.


So why do some people prefer more traditional bows?

The people who love recurve bows, longbows, horsebows, etc - they love the challenge. They love practicing. They are out there practicing constantly and getting amazingly good at what they do. Using gadgetry to make the process easier for them is blasphemy.

In a scale of easiest to hardest, it goes like this:
See how recurve bows are actually in the middle there? More of a challenge than a compound bow, but still less challenging than both longbows and horsebows.

Crossbows are more powerful, faster fps speeds, more accurate, and super easy to learn how to use. They are so stupidly easy. And being able to shoot them while laying down, well that just makes them fun too.

But does that make them superior?

No. It doesn't. Because crossbows are also ridiculously slow to reload, and very easy to chop off your finger or shoot yourself in the foot if you don't know how to use it properly. (The primary things a crossbowman needs to learn is actually a seminar on how to safely load and unload a crossbow.)

So it all comes down to Pros and Cons

Crossbows and compound bows are easier, but slower. Traditional bows are faster, but require more training.

And with anything that has Pros and Cons, what the individual archer chooses to use really depends on their needs.

eg. When fighting on horseback the Iroquois in Quebec preferred to use crossbows*. In contrast the Apache preferred horsebows when fighting from horseback. Each had different tactics. The Iroquois would ambush their enemies with the crossbows and then use the trees to provide cover while they reloaded their crossbows, thus it was used more as a mobile sniper would use it. On the open plains however, the Apache did not really have much cover to help them execute ambushes or stay hidden during a battle. Thus they preferred lightning attacks where they charged in, shot everything with lots of arrows, and massacred their foes - a tactic the U.S. cavalry later copied and used against them.

* Fun Fact, yes, some North American Indigenous peoples did actually use crossbows. They simply were not as popular because they were slower to reload.

Depending on your circumstances you might think horsebows are the bee's knees. Or maybe you prefer longbows. Or maybe crossbows are awesome because you like to just point and click.