How to Befriend a Squirrel + Tips on Squirrel Hunting 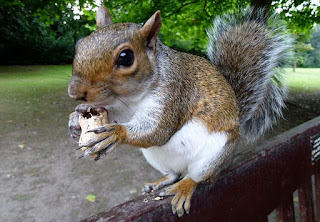 This post is a two parter and I admit, the first part is seemingly opposed to the second part - but when you read the 2nd part you will realize why the two are linked.

Part One: How to Befriend a Squirrel 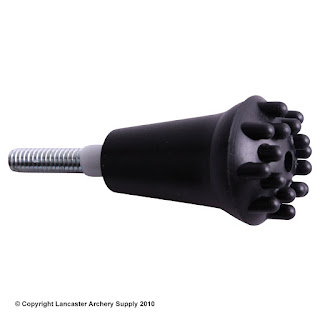 Bowhunting squirrels is actually good practice for stalking deer and similar large game. A squirrel's main torso is roughly the same size as a deer's heart/lung area, and the distances you would be shooting at them are roughly the same.

Some people really LOVE the taste of squirrel. It apparently tastes a bit like rabbit, pork, lamb and chicken (depending on who you ask). The meat is very high in protein and low in fat, which makes it healthier than many meats you will find in your local supermarket too.

Cut each squirrel into 6 pieces, using the 4 legs and the meaty part of back to fry (save the rib piece for making dumplings at another time).

Roll the squirrel pieces in the flour until well coated.

While oven is preheating, put a 10 to 12 inch cast iron skillet on top of stove. Using medium-high heat, melt margarine and bacon grease or vegetable shortening in skillet. Melted shortening mixture should be about 1/4 inch deep in bottom of skillet.

Place cut up squirrel in skillet in a single layer and salt and pepper to taste. Brown on both sides (approximately 3-4 minutes for each side).

After browning, cover skillet with lid or aluminum foil and place in the preheated oven. Bake for 20 – 25 minutes depending on how young the squirrels are.

Then turn the squirrel over and bake for another 20 – 25 minutes. Test with a fork to see if done. If fork slips easily into the meat it is ready to eat. If you feel the squirrel is not quite done, turn it over again and bake for 10 to 15 more minutes.

Skillet / oven fried squirrel is excellent served with a side dish of homemade biscuits topped with white milk gravy made from the squirrel drippings.