Seriously, by the time anyone reads this it will be 2018 anyway. So whatever.

Most Popular New Posts in 2017

How to Unstring a Vintage Compound Bow

Five Ways to Buy Land suitable for an Off Grid Home

My Love of Vintage Compound Bows

Why you should Never use a PVC Bow

How to make a Floating Shipping Container Home

The Beauty of Rabbit Hunting for Off Gridders 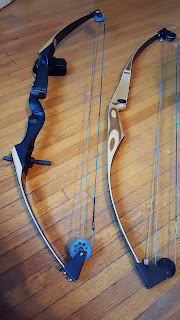 So last year I decided to finally get into the business of repairing compound bows, something I had been doing for years as a hobby. To me it is a bit like performing surgery. I also purchased several antique / vintage compound bows and added them to my collection, so it should not come as any surprise that some of the posts were about this topic. What does come as a bit of a surprise is that 4 of the top 10 most popular new posts in 2017 were about compound bows, so clearly the readers were enjoying this topic too.

Two of the most popular posts were about buying off grid / shipping container homes, so that is a good sign - as that is supposed to be the primary focus of Project Gridless.

And to round it off, woodworking tools are great, PVC bows are bad, and rabbit hunting is good too. No surprises there.

Plus in 2017 my son Richard was born. Which is awesome. He is so cute it boggles my brain and he grows so fast. I look forward to many years teaching him archery, fishing and many outdoor skills.

This year I have also decided to record some statistical notes for ProjectGridless.ca on here too, in terms of the overall visitors to the website during 2017 and also some annual statistics for previous years.

I couldn't be bothered to do the math for 2014 to 2016, so those numbers are somewhat accurate estimates based on me calculating the average and making sure the total visitors ever matched the results. 2014 for example was a big year, with 100 posts, so it is really no surprise that was a big year. I think that was also the year I bought the domain name "projectgridless.ca" and started promoting the site more.