Back in February I wrote a post about Ontario's Duck Curve: Solar Power Vs Ontario's Electrical Grid: The Duck Curve. 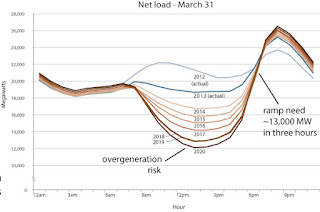 The Duck Curve is a chart of Ontario's average daily usage of electricity and the supply of electricity, which increasingly has taken on the shape of a duck.

The Duck Curve is caused by the effect of increasing solar production and it creating an abundance of supply during peak sunny times of the day, but zero supply during the rest of the day.

It also doesn't help that demand for electricity is actually growing, which means increased demand during evening and morning hours, especially the 7 PM to 10 PM period when there is zero of solar power coming in to the grid.

To prevent brown outs nuclear power plants need to be running at higher capacity ahead of time to create a surplus of electricity so that we don't have brown outs. This creates inefficiency and wasted electricity during that transition time period.

So what does this have to do with wind power and wind turbines?

Increasing wind turbine electricity production does quite a bit to offset the impacts of solar power.

#1. Wind is More Reliable than Solar - Wind power doesn't rely on the sun and is active 24 hours per day, as long as there is wind, which is pretty much all the time because Ontario is a very windy province.

#2. Lake Effect Wind - It is slightly windier during mornings and evenings near lakes due to changes in temperature and the flow of wind towards and away from lakes during those time periods. The larger the lake, the more profound the effect.

#3. Ontario has quite a few "Great Lakes" that benefit from the Lake Effect Wind. Probably one of the reasons why Ontario is so windy in the first place.

Below is a map of where wind turbines are built in Southern Ontario. As you can see, the lakeshore of Lake Huron has a lot of wind turbines built there for the purpose of benefiting from the Lake Effect Wind coming off Lake Huron. 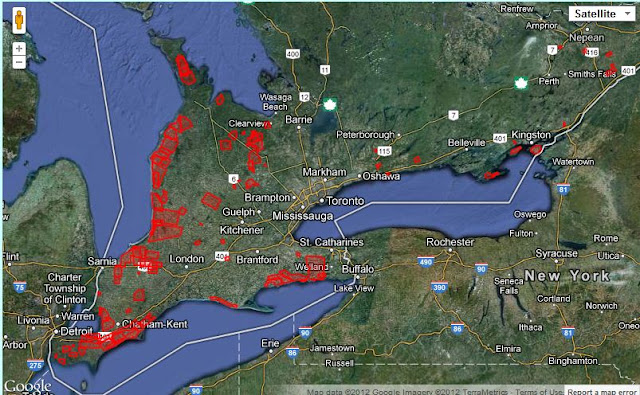 So is Wind Power a solution to the Duck Curve?

Yes, it helps to create a surplus of renewable energy.

Yes, it also helps that wind power is slightly stronger during morning and evening changes in temperatures thanks to Lake Effect Wind.

But the amount of electricity being produced at present merely offsets the solar power Duck Curve. The impact is less at present, which means Ontario is reliant upon nuclear power to pick up the slack.

What about Hydro Power?

Ontario also produces a lot of hydro-electric power thanks to our many rivers, lakes and dams. So much so that we call the government run electricity producer "Ontario Hydro", and refer to "hydro poles", "hydro bills", etc.

Well, the truth is that it is possible to offset the Duck Curve using hydro power, by simply shutting down dam turbines and not allowing so much water to flow through them during the middle of the day. Unfortunately, not all dams are equipped with shut off valves as some of them just run on a constant level, with no shut off system available.

If they did, this would allow nuclear power plants to run more at a constant level (which improves cost efficiency). Unfortunately since a shut off system isn't available for many dams (and would require a sizable investment to do), this is seen as a wasteful option as hydro power is basically "free electricity" once the dam has been built. Adding shut off valves would just reduce the amount of free electricity Ontario actually has.

What about Geothermal Power?

Ontario at present has zero geothermal power plants. None. Nada. Not in all of Canada.

Despite being able to produce as much electricity as coal, gas or nuclear, not one single province has taken the bold and decisive step of building a geothermal power plant. (Or refurbishing an old coal or gas plant into a geothermal plant, seeing as they all use the same steam turbines.)

So what does Ontario do with the energy surplus?

Well, it doesn't go completely to waste. We sell it at a discount to Quebec, Manitoba and to the USA. Because of the discount we lose money in the process, but it is still better than sitting on an energy surplus that isn't being used at all.

So what about people who live Off the Grid?

Well, hopefully we are using a nice battery system and we are not paying gigantic hydro bills like everyone else. We store our solar, wind (and sometimes even hydro) power in batteries that provide electricity for our off grid homes.

And then we laugh about all the money we are saving while the hosers are paying off "old hydro debts" that were caused by the Ontario government overspending on nuclear.