Cheap Hydro Electricity for Off Gridders

So you have a stream or river going through your property - or possibly waves on the shore of a lakefront property. How do you turn that untapped hydro energy into electricity for your off grid home?


Or you could buy a mini turbine like the one in the following video.

"Blue Freedom" as a company offers a variety of different turbines, including kinetic energy turbines suitable for lakefront waves, so that it creates energy when waves comes in to the shoreline, and again when waves go back out. The constant motion creates electricity, and it only needs the water to be 0.5 meters deep to be fully effective.

But is that really cost effective or efficient? Certainly there are cheaper ways to DIY? 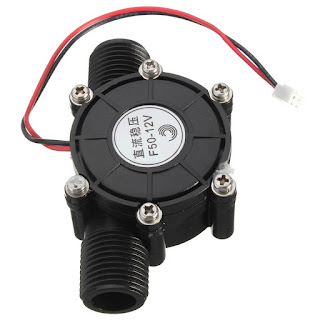 On the right is a water turbine generator that you can buy on Amazon.ca for a mere $14.29.

You dam up the river or stream and allow water to flow through pipes attached to the generator.

The generator then produces electricity, and all of the water gets used for energy production.

To preserve small wildlife (minnows, frogs, etc) from going through the pipes and clogging up the turbine you can add grates to the intake pipe so that tadpoles and other small critters cannot get sucked in.

Worried about larger fish that need to be able to travel over the dam?

Just create something akin to a salmon fish ladder or a ramp that allows some of the water to freeflow while 50 to 75% of the flowing water is still used to create electricity. 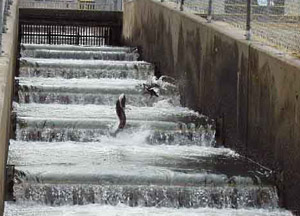 Don't want to impact the wildlife that much, but still want to save money while being somewhat lazy? 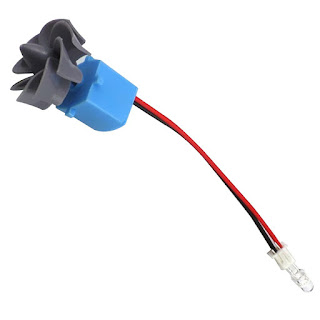 Well there is a cheaper alternative to the Blue Freedom model shown in the video.

That is ridiculously cheap.

And ridiculous. I am partially doing this because it is FUNNY how much electricity this low cost hydro generator actually produces.


It makes you realize that Blue Freedom is basically all logo, brand name, and German guys in fancy suits.

If you just buy the components and build it yourself you can save a tonne of money.

Is it more work than buying the Blue Freedom generator? Yes. But not as much work as building a dam and a method for the fish to traverse the dam.

For the cost of one Blue Freedom Generator ($340 USD) you could get quite a few of the cheaper version. At the current exchange rate that is $436 CDN, so that would be 72 of the little guys.

Now 1.5 volts isn't much, but 72 of them is 108 volts of direct current with 14.4 amps. Place them in the part of the river with the fastest flowing water and you can maximize your results.

Anything over a hundred volts is quite a bit. 600 volts is enough to electrocute someone. 108 volts is actually quite a lot.

Back to the dam method...

Now I wasn't able to find able to find the amps for the device, but you can best be sure that will be a lot of watts involved. Still not enough to electrocute yourself, but it is still a serious chunk of electricity that would be produced by 30 of those generators.

So how do you even use 30 of those generators? You would need a fairly big dam, or perhaps a series of smaller dams along the river. A small stream would not be enough, you would need at least a large fast flowering stream or a small river.

Thus it really comes back to the idea of real estate. If you want to produce hydro electricity on your property, you really need to find land that has fast flowing water on it (or lots of slow moving water that can be made faster by building a dam).

Plus what would you even do with 360 volts of electricity? That is so much you will never be able to use it all.

How does hydro power compare to solar or wind power?

The "Renogy 200W 12V Polycrystalline Solar Bundle Kit" will cost you $423 CDN (but does come with a kit of other goodies, so that is nice. Unfortunately solar really works at peak efficiency a few hours of the day.

But price isn't the only factor here. The real question is how many volts and watts are you getting for your investment?

But do any of the above systems provide up to 360 volts of electricity? Nope, none.

The first turbine only provides up to 12 volts, and only when the wind is sufficient.

The second turbine costs over 4 times more than the hydro dam solution, but only a maximum of 48 volts instead of 360 volts. To get the equivalent using the hydro generators you would only need to buy 4 generators for $57.16.

The first solar panel "200W 12V" has less watts than the similarly priced wind turbine, mostly because it is producing half the amps. So in reality it produces half the power of the wind turbine, but costs slightly more.

Clearly from this price analysis, wind turbines are two to three times better than solar panels.

And hydro produces way more than both, but requires some extra work to get that dam in place. (It is easier if the beavers build the dam for you, then all you need is to find some real estate that has a beaver dam.)

Even the ridiculous "72 Baoblaze Minis" solution produces more electricity than the wind turbines or solar panels. And I only did that calculation because it was funny.

The Downsides of Solar, Wind and Hydro

So solar power really works during the day, and only when it is sunny.

Wind power works 24/7, but only when it is windy enough to reach full capacity.

Hydro power is pretty constant, but can be a problem if the river freezes during the winter, and follows the assumption that it rains regularly so that the river or stream does not dry up.

But in terms of costs and the amount of electricity being produced, hydro is very hard to beat.

So there really is no contest in terms of price and the amount of electricity being produced. Hydro is King.

Don't Tell Anyone You Are Building a Residential Dam

Or better yet, buy a place with an existing beaver dam.

So here is the thing: The government doesn't like it when you start building residential dams to make your own electricity. You can also upset your neighbours who live upstream or downstream if they notice changes in water levels. So the best solution is to keep your dam a secret and disguise how you get your electricity.

eg. Hide the dam under some old logs and other debris so it just looks like a natural logjam.

With the beaver dam solution you are using an existing dam and then adding pipes to help drain or partially drain the beaver dam. You then add grates so the beavers cannot mess with your intake pipes.

I wrote about this back in May in the post How to turn a Beaver Dam into a source of Electricity.

Even if you do go for the rather novel beaver dam solution, don't tell anyone about it. Jealous neighbours and upset government officials can get their underwear in a knot about just about anything, so the less they know the better.

It isn't illegal, but people can still give you grief if they see you doing something they wish they had thought of first. Hence why so many Off Gridders value their privacy.

Email ThisBlogThis!Share to TwitterShare to FacebookShare to Pinterest
Labels: DIY Projects, Electricity Off The Grid