18 years ago I began studying painting at York University, what would amount to me spending 5 years studying the topic formally (and setting a record for being the BFA student to take the most studio credits).

With respect to "collecting" paintings, sculptures and photography I have always followed a Do It Yourself approach. I would never buy art pieces from other artists because I knew I could always just make it myself. Possibly even make a better version of it.

Anything that I did buy over the years, in terms of art collecting, was always something that I knew I could not make myself. Or at least not make without a significant amount of new training.

Encaustic is an excellent example. It uses hot wax to create images on fabric, and I had no training on making artwork using hot wax. I could make a similar image perhaps using painting, but it would not be the same thing, and since you could buy an encaustic print for $20 or $25, making my own version of something I saw on a print didn't make much sense when it made more sense to just buy the print.

During that same time period I also studied art history - enough that I effectively minored in the subject. This would later lead to me writing a number of articles such as:


"Art in the Age of Digital Reproduction"

"The Modern Car is a Work of Art"

The first article later went on to become something some university professors now have as required reading for their students. (As in, I wrote something in university that other university students now have to read as part of their curriculum. Haha!)

The latter article combined two of my interests, art and cars, in which I pushed the idea that modern sportscars, supercars and hypercars are essentially feats of beauty and engineering, comparable to a great work of art or a fascinating example of architecture. True, the car still gets you from A to B, sometimes in a luxurious fashion, but luxury doesn't necessarily mean it is aesthetically beautiful. Beauty in the business of auto manufacturing is essentially about making a car look fast, sleek, amazing, sexy, insert adjective here, etc - but they also need to make their car stand out and look UNIQUE - and that duality of  uniqueness and beauty is what makes it an art form.

And now back to the subject of archery. 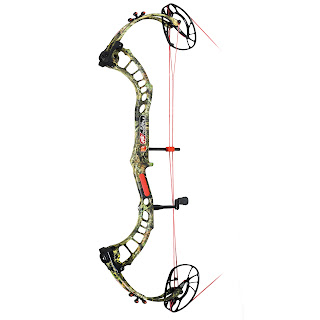 Bows can be beautiful but they can also be ugly.

The modern compound bow is terribly ugly in my opinion. A jumbled mess of limbs, cams, cables and gadgetry. It would make a Futurist painter happy, but even they would have to admit the average compound bow is pretty ugly.

The Full Throttle is not designed to be pretty. It is designed to be fast. It is one of the fastest compound bows currently on the market, capable of shooting arrows at 380 fps.

And then they slap some camo print on it and it sells like hot cakes because the average person who buys a super fast compound bow like this doesn't really care about what it looks like, they only care about how fast it shoots and how accurate it is.

Which means that when it comes to the issue of beauty, you are not going to find any "art pieces" amongst modern compound bows. They are as beautiful as an utilitarian toilet.

No, if you want to see something beautiful you need to be looking at the vintage bows - which is why vintage bows are the bows that are worth collecting. Modern compound bows are essentially disposable. They break down eventually and you have to throw them out because they are not worth repairing. Hence the word disposable.

Compare that to a vintage compound bow from 1970s... made by the now defunct manufacturer "Black Hawk". Below are two examples of wooden compound bows made by Black Hawk. 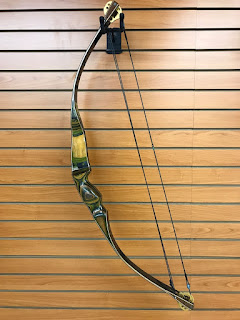 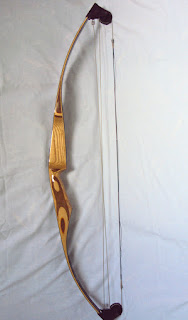 Wood, beauty and craft rolled into one aesthetically pleasing bow. They are still compound bows just like a modern one, still capable of power/speed, but it is a bit like buying an antique sportscar like an old E Type Jaguar - you are buying it because it combines both beauty and function.

And this concept of combining beauty and function isn't limited to bows and cars. It is also a popular topic in architecture.

Modernist Architecture - Ugly blocks of concrete in which you can see the methods the builders used to make the structure in the concrete. The form primarily serves its function as a building, it doesn't matter what it looks like. Common adjective to describe a Modernist building: "Cheap".

Postmodernist Architecture - Flowing Lines and Curves, potentially still made out of concrete but done in a manner so that you don't realize what it is made out of and instead are distracted by the beautiful shape and design of the structure. Common adjective to describe a Postmodernist building: "Interesting".

In terms of art history, modernism came first. People were obsessed with new building methods and realized that buildings didn't need to look good, they could basically just build a big ugly building out of concrete in a hurry and the big selling point was that it was really cheap.

Then postmodernism came along and decided "Hey, we are tired of seeing these big ugly buildings. Lets make something beautiful!"

Except in terms of the history of bowmaking during the last 100 years, people made beautiful bows first - and then over time various styles of bows became uglier over time.

Note - I have been picking on compound bows, so let me just state that I currently own 3 compound bows - and I repair them for other people. Not a lot of people know how to repair compound bows, so I feel I have the right to diss them on their looks if I want to.

Next lets talk about recurve bows. 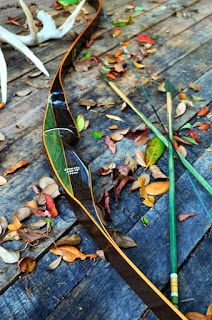 On the right is a recurve bow made by the company "Bear", and with it you can see that the photographer has paid attention to framing their photograph with antlers and some arrows to create a specific kind of image: A Still Life.

Archers who own such bows take images like that all the time, because they recognize that the bow they are using is a work of art and they end up composing Still Life images of their bows as a result.

Below are several more Still Life photographs of vintage recurve bows. The photos below are all photos I took myself.


Below is one more Still Life from a few months ago, but I used a Bear Grizzly Static from 1949.

And the fact that there are people like myself who collect these bows as "objets d'art" only further entrenches the idea that these bows can be collected for their artistic value, in addition to their historical value.

Contrast this with modern Olympic recurve bows and you will note several things. 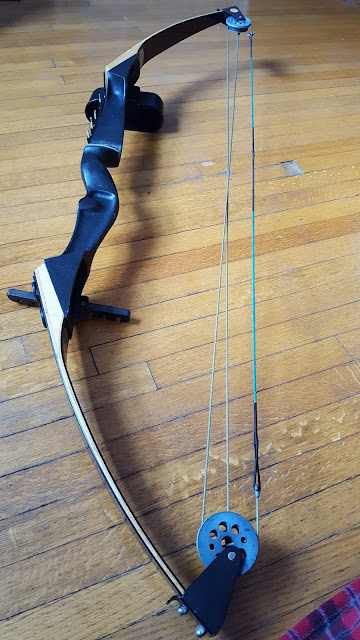 On the right is a photo I took of a Model T Jennings Compound Bow. I took the photo for a blog post I was writing about How to Unstring and do Maintenance on a Vintage Compound Bow.

So the photo I took was meant to be utilitarian for the purposes of the blog post, but the bow itself doesn't look half bad. In the photo it has been freshly cleaned, the bowstring waxed and the bow has been given some much needed maintenance.

Now I purchased the Model T Jennings for a reason. It is one of the first compound bows ever made, so to me it has historical value. I have dated it to circa 1970, 4 years after the compound bow was invented in 1966 - and 1 year after Jennings first started manufacturing the Model T in 1969.

The Model T is not a terribly attractive bow. Compared to a modern compound bow however, it is positively beautiful.

It is certainly not as beautiful as the Black Hawk compound bows mentioned further above, but it is not ugly either.

The real value to me about this bow is not that it is attractive so much that it belongs in a museum. This is Model T Jennings that is in near-perfect condition. I am tempted to never shoot it and hang it on a wall instead purely for its historical and aesthetic value.

I certainly will never be shooting it on any day when it might rain. Water could end up rusting the cables and cause the cable to snap where it means the Teardrop (there is no plastic covering the point where the cable meets the Teardrop).

Thus if I do ever shoot this compound bow I will only be doing so on days when it is not hot and humid, not raining, and I will be giving it regular maintenance if I do decide to shoot it.

I will also not be letting anyone else shoot it either.

And someday, quite possibly, I will open an archery museum and this will be one of the bows that are on display for its historical value.

It is not the only bow I bought purely for its historical value either. For example I also have a Roy Rogers Longbow (for children) from 1952. It is not a particularly interesting bow. It is not beautiful, it is just painted black. It isn't even that good of a bow. I bought it because it was a Roy Rogers longbow and because I felt it is something worth adding to my collection. Indeed, if it wasn't for the signature on the bow it wouldn't really be worth much at all. 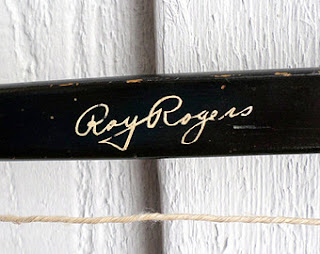 Did I Miss Anything?

Now there are of course other styles of bows that I did not get to talking about here.

I only briefly touched on longbows, but there are also shortbows/horsebows (such as the Korean Hwarang), Japanese Yumi bows, and even crossbows - to which I admit, I think it would be cool to own an antique "stone crossbow" which shoots ceramic pellets or clay bullets.

And some of those might only have historical value, but others might actually be quite beautiful to look at.

Like the Damascus steel and gold recurve bow from the 1900s below which sold at auction years back for over $50,000 USD. Look at the fine details of the gold on the limbs. That is pretty impressive. 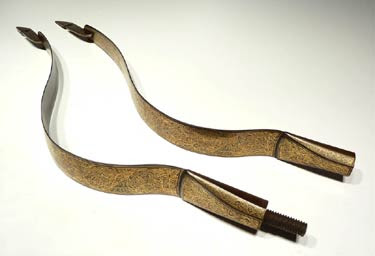 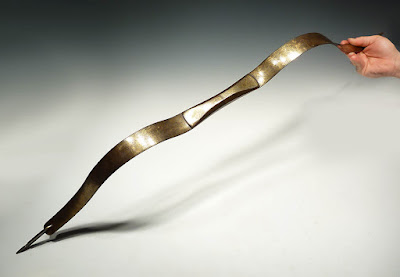 Not all bows are art pieces, just like not all bows have historical value. Some bows are just plain ugly.

But some - especially vintage bows - are both beautiful to look at and have historical value, and therefore are worth collecting and worth being recognized as art pieces.