So one of my former archery students sent me a photo today, showing how the cable on his 1980s vintage compound bow had snapped. 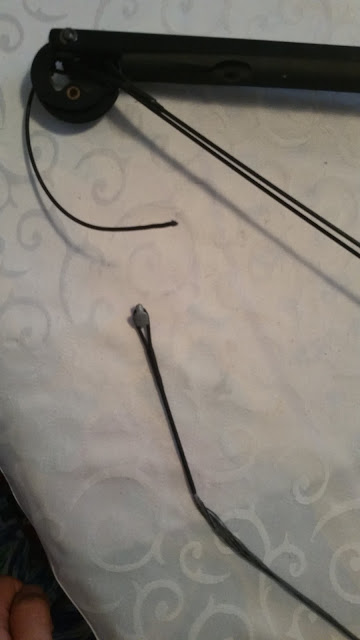 Quote from his email:

"The string/cable snapped just above the metal connector. I emailed the bow shop in Waterloo, and they said they could probably fix it for 80-100$ but said it was probably more than the bow is worth (which turned out to be true by about a factor of 2 based on traditional eBay prices for that bow)..."

And I was like... "Damn, the Bow Shop is really overcharging for replacing a cable."

The cable itself isn't that expensive. It is the half-hour that it takes to install it that really represents that cost of $80 to $100.

People could just watch various YouTube videos on how to replace a cable, but sadly most people prefer to hire someone else to do it.

So I am going to see if he will let me fix his compound bow. I will wager dollars to doughnuts that I can fix that bow in less than 30 minutes. (I probably even have some bicycle cables that would do the job in my old box of spare bicycle parts...)

However by the looks of where it snapped, I might not even need a new cable. It snapped at the attachment point where it joins the bowstring. So 99.9% of the cable is still usable.