Horses for your Off the Grid Home 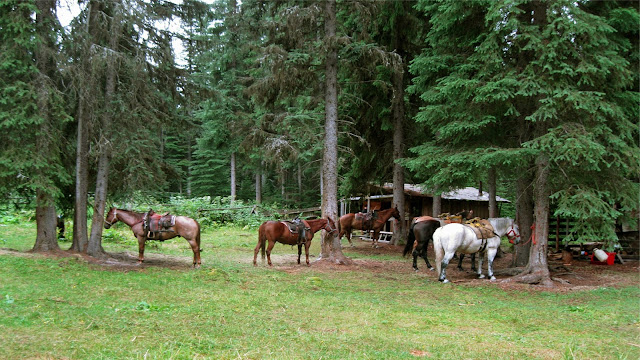 I have been wanting a horse (I think) since the age of 5. Back when I used to pretend to be a cowboy and was surprisingly good at quick draws and twirling my toy gun on my trigger finger.

I learned to ride when I was about 12 at summer camp. We were given the choice of BMX bicycles or horses, and I already had a bicycle, so I chose the horseback riding lessons.

I came prepared with a set of cowboy boots borrowed from a relative, which I later outgrew as I got older.

Later in my teen years I bought a pair of cowboy boots - and was teased by bullies for wearing them, but whatever, I liked them anyway. Wore them for years until they were worn out.

As a writer, horses would often be featured prominently in my stories and books - mostly about knights and such.

Owning a horse farm therefore has long been a dream of mine. To me buying a horse farm and raises horses is the answer to the question: "What would you do if you won a lottery?"

Which is essentially a thought experiment.

If people would only do certain things if they won the lottery, the follow up question is supposed to be "So, why aren't you doing that right now?"

Which essentially comes back to the idea, if something makes you happy - you should go do it, regardless of whether you have the money.

My problem is that horses are expensive. Not just the cost of the horse itself, but the cost of feed, housing the horses, veterinarian visits, and so forth.

Land is expensive too. So owning a horse farm effectively becomes a two-fold problem involving money. 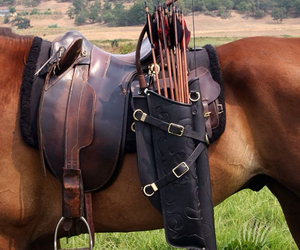 One of the ideas I have been exploring however is starting a horse farm and hiring someone to train people how to ride, while also offering archery lessons - and finally be one of the few places in the world which offers equestrian archery.

Equestrian Archery is pretty rare. Very few people do it globally. Hungary is quite well known for it, as is Mongolia. But many countries have basically lost touch with this particular skill which was once highly valued for both hunting and warfare.

And since it is a rare skill, but also exotic people would be willing to pay a premium to learn how to do it. (Typically the kind of people who could afford to buy a horse in the first place.)

So my dream of owning and operating a horse farm could become a reality, and I could pay for it for accepting archery students, students who want to learn horseback riding, and by teaching equestrian archery.

So how do I make electricity Off the Grid on a horse farm?

#1. Solar Panels on top of the Horse Barn to provide extra electricity during daytime.

#2. A Wind Mill for pumping Well Water through a filtration system

#3. Wind Turbines to provide electricity to lights and other amenities, day or night.

#4. Backup Power Battery System, so that the solar panels/wind turbines provide energy to the batteries and then store it for later when it is needed.

#5. If the property borders on a flowing river or lake, additional electricity could be made via a small generator (using a turbine, waterwheel or a tidal generator).

#6. Did I mention HORSEPOWER? In theory you could have horses walk in circles with a generator in the middle, complete with gears for extra speed on the generator since the horses are capable of providing significant power. This is not a new concept really, it has been around for a long time. 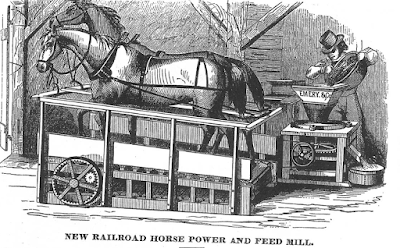 Interesting Factoid: It's a common misconception that one horsepower is equal to the peak power production of a horse, when in reality a horse on average is capable of a maximum of around 14.9 horsepower. By comparison, a human being is capable of approximately five horsepower at peak power production, but lacks a horse's stamina. 14.9 horsepower is roughly equal to 11.1 kilowatts. Thus in one hour, a horse could produce 11.1 kWh. The average American home uses 900 kWh in a month. Four horses, working only 1 hour per day, would produce 44.4 kWh - over a 30 day period that would be 1,332 kWh - which is more than enough for an average American household. At that rate, the horses could have two days off each week and they would still produce 951.4 kWh just by working 1 hour for 5 days per week. Factor in solar panels and wind turbines, and the horses could work even less.

I am a big fan of hand tools. Assuming that the property doesn't already have a structure that can be suitably converted into a horse barn, such a structure would need to be built. In which case, I am in favour of borrowing designs from Mennonites to get the building done. The beauty of Mennonite architecture is the following:
A second option is to buy a Prefabricated Horse Barn, like the one in the photo further below. Prefabricated buildings are made in a factory and then shipped to the location and then assembled. It is a cheaper and faster way to build structures by mass producing them in a factory, which at the same time maintains quality control, is not hindered by rain or weather conditions, and the construction workers don't spend half their time waiting for supplies or machinery to arrive, because all the supplies and machinery are already there in the factory.

So there you go, an inexpensive way to build a horse barn, a list of ways to provide electricity so that the property is off the grid (and you save money by paying zero for electricity and pay less property taxes for being off the grid), and a person like myself could potentially turn a profit by teaching archery, horseback riding, and equestrian archery.

On top of that you would also have the option of using the horses for transportation, for farming, for hauling lumber, and a variety of tasks requiring a little extra "horse power".